‘Save the Hoover Buses’ deserves praise 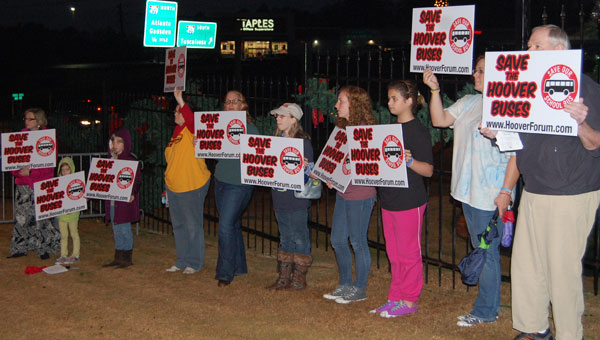 There they stood before city of Hoover’s unplugged Christmas tree, armed with signs that read “Save the Hoover Buses” as the tree lighting countdown commenced.

They had picked the perfect spot, so that every guest in attendance could heed their message — a message they have consistently delivered for the past five months.

Save the Hoover Buses, also the name of the grassroots group that formed after the Hoover Board of Education voted to discontinue bus service in the 2014-2015 school year, deserves a hat tip whether you agree with them or not.

The group, comprised of men and women, young and old, black and white, active parents and empty nesters, rallied together to make their voices heard. They showed up at every school board and city council meeting, clad in baseball caps and T-shirts that bore their to-the-point message as they peppered school and city officials with questions — and sometimes a critical comment or two.

They used social media to spread their cause, and posted an online petition that garnered signatures from as far away as California, Wyoming and even Canada.

It appears the protest paid off. The school board at its regular meeting last week reversed its decision to cut bus service, garnering cheers and applause from the audience. School officials are now exploring ways to continue bus service with the school system’s own bus fleet and drivers and charge students a yet undetermined fee to ride the bus.

Superintendent Andy Craig said the school system’s ability to receive the state allocation for transportation and collect fees from bus riders was the primary contributing factor in the change of heart. Surely Save the Hoover Buses was a weighty supporting factor.

As the group stood determined by the unlit Christmas tree, I couldn’t help but notice the young faces on the protest line, likely the children of parents opposed to the school bus cuts. They have been taught a lesson that cannot be grasped in the classroom alone.

Speak up. Stand your ground. And maybe, just maybe, change will come.