Groups come together to honor veterans 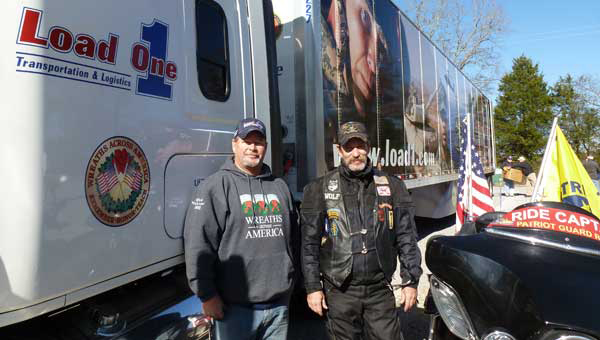 Load One truck driver Ken Johnson standing next to Patriot I truck with Patriot Guard Ride Captain Tim Brown standing next to his Harley motorcycle after delivering and escorting 2,400 wreaths for veterans buried at the Alabama National Cemetery as part of Wreaths Across America.

The Alabama National Veteran’s Cemetery is known to many as the “Arlington of the South.”

On Dec. 14, the fifth annual Wreaths Across America program was held at the cemetery. Sponsored by the Blue Star Salute Foundation, the program includes the placement of wreaths on the graves of 2,400 deceased service members at the cemetery.

The delivery of the wreaths from Worchester Wreath Company in Maine to Alabama is done with great respect by Load One Transportation with escort by the Patriot Guard Riders. Load One is owned by John K. Elliott II and located in Taylor, Mich. Elliott has donated two 18-wheeler trucks called Patriot I and Patriot II, which are only used for charity

“This load of wreaths is probably the most important and sacred load we carry,” Elliott said.

Ken Johnson has delivered the wreaths the last two years and has already been chosen to drive next year.

“I have been a truck driver for 45 years and it is a huge honor to be chosen by Load One to deliver these wreaths,” Johnson said. “The whole program is about Wreaths Across America’s mission: remember, honor and teach. Mr. Elliott is totally dedicated to this project.”

Patriot I was escorted by the Patriot Guard Riders (PGR) whose mission “is to ensure dignity and respect at memorial services honoring fallen military heroes, first responders and honorably discharged veterans.” The Patriot Guard Riders attend funerals as invited guests of the family to show respect and shield families from outside interruptions.

PGR Tim Brown, Gray Wolf, was ride captain and met Patriot I at the Georgia state line and escorted the truck to the cemetery, picking up 20 riders along the way.

“I was a warrant officer with the 7th and 5th Special Forces Group for 33 and a half years,” Brown said. “I served in Panama, Bosnia, Somalia, Beirut, Iraq and Afghanistan. I guess you could say I was a human target. After I retired from the military, I read the PGR mission statement on their website and wanted to be part of this. The vets are my family. My motto is ‘Hero down, kick stand up and I’m gone.’ I ride for these heroes for all who serve are heroes.”