Bachus reflects on 20 years in office 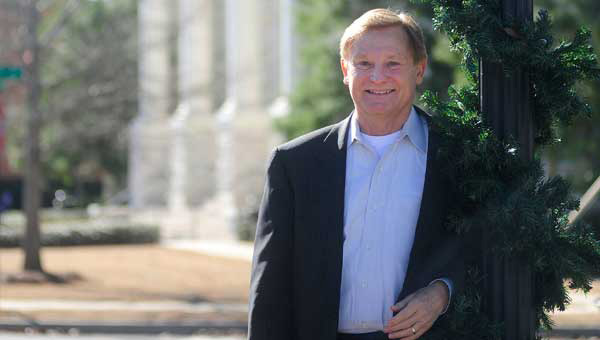 U.S. Rep. Spencer Bachus, R-Ala., will not run for office again when his term expires in January 2015.

COLUMBIANA — On Sept. 18, 2008, U.S. Rep. Spencer Bachus, R-Ala., found himself in a hastily called evening meeting in the conference room of then-Speaker of the House Nancy Pelosi.

He and a handful of the most powerful and influential in the House and Senate were called together by then-Treasury Secretary Henry Paulson and Chairman of the Federal Reserve Ben Bernanke, who broke to them the terrifying news that the nation’s largest banks were on the brink of failure, which, if allowed to happen, undoubtedly would have cataclysmic consequences in our country and even the world.

The event is documented in a book written by former Washington Post Managing Editor Robert Kaiser, “Act of Congress,” which was published in May of this year.

Kaiser writes that Paulson’s solution to the crisis was to buy the residential and commercial mortgages, which he referred to as toxic assets, weighing down the banks and hope that the assets would increase in value one day.

According to Kaiser, in that meeting Bachus suggested, instead of buying the bank’s assets, why not just buy shares of bank stocks?

Kaiser writes Paulson dismissed that idea outright. However, after Congress approved more than $700 billion in bailout funds, Paulson found his plan to auction off the troubled mortgages too complicated and instructed his staff to “figure out how to do just what Spencer Bachus had suggested.”

What a difference five years make.

The controversial bailout has today proven profitable for the American people to the tune of more than $60 billion, thanks to Bachus’s plan to charge interest on the money loaned to banks and to secure stock warrants as part of the deal.

In an interview Dec. 17 at the Shelby County Reporter office in Columbiana, Bachus said, “Some of those bank stocks went from something like $7 to $25 a share.”

Open collared and relaxed, with a little twinkle of a smile, Bachus said, “Imagine that. It was a bunch of Alabamians who knew best.”

Bachus won’t seek another term in the U.S. House of Representatives, where he has served Alabama’s sixth district for the last 20 years.

However, he’s quick to point out he’s not retiring.

“I don’t consider that I’m at the end of my career,” Bachus said. “I have no lack of enthusiasm or energy. I just feel a change is in order. (Wife) Linda feels that way, too. We are ready for a new challenge. Sometimes you can’t explain those things. Maybe it’s generational.”

Although his term does not end until January 2015, Bachus announced his plans in September because campaigning for the next Congressional elections will begin in a month or so.

Bachus said he had hoped to end his political career as a member of the U.S. Senate, but such wasn’t in the cards.

“All of my friends who I came in with are in the Senate now, the guys I’ve palled around with, or they have either retired or gotten beat and are pursuing new careers now. Those in the Senate tell me it is a more deliberative body, where they can actually sit down and formulate policy. Now, as long as Harry Reid is there, our agenda is stalled, but they do find consensus on a lot of bipartisan issues.”

The future of the GOP

“If you look at the Democratic Party, they passed Obamacare or the Affordable Care Act and Dodd-Frank when they had the presidency, the House and the Senate. Whether you are 100 percent Tea Party or 100 percent mainstream establishment, you agree we need the presidency, the Senate and the House and we are not going to get there with an angry agenda.”

That angry agenda is scaring off important voters, Bachus said.

“There are studies that show we are losing unmarried women by 30 and 40 percent, and they make up the fastest growing electoral demographic in the country,” he said. “I’m frustrated and sometimes I’m angry, but you have to channel and control the frustration into a constructive, not a destructive strategy.”

He said while most of the voters in his district said to shut down the government, it was a plan that, according to Standard and Poors, ultimately cost the nation $27 billion.

“Our country can’t afford to take a $27 billion hit and accomplish nothing,” Bachus said. “And the Senate, basically with our numbers falling as Republicans, were happy to ride that out. It was a self-inflicted wound.”

Republicans — tea partiers and the establishment — want the same thing, he said.

“We agree on wanting to reduce spending, reform entitlements, sooner or later balance the budget, strong national defense, get rid of unnecessary government regulations, keep the good ones. Where the difference has been is in tactics. And, as I said earlier, it’s just anger. You don’t destroy the federal government, you reform it. Anarchy is not an agenda,” Bachus said.

“If we had all united as Republicans and tried to elect our most electable people in the (2010) primary, we would control the Senate right now. We wouldn’t have Obamacare, and with both the Senate and the House, then the American people would say to us, ‘What is your solution to health care?’ Like immigration, health care is a broken system. And, we would have addressed it. And, I think if we did address it, President Obama may have been a one-term president.

Coming up with a strategy all agree on is difficult when the two sides of the Republican party are at such odds with each other, he said.

“At my victory celebration, I had several active tea party members celebrating with me and they told me they supported me and told me other tea partiers did, too,” Bachus said. “But within the tea party there is a segment who has excluded me. I have never excluded them. When we’ve talked, I have enjoyed our conversation and we’ve both gone away with a better understanding. I represent them. And that door remains open.

“If I were not in Congress, I might be a member of the Shelby County Tea Party, too. They are patriots, but if they were in Boston, would they be writing a petition, or would they be burning the city down?” he said. “Now I’m not suggesting anyone would do that, but you get my point.”

Despite being chairman of one of the House’s most visible committees — financial services — and being credited by some as having helped lead our nation through one of its most difficult crises, that’s not what Bachus thinks of as his most important accomplishment.

“The Alabama National Cemetery will always be the thing I’m most proud of,” Bachus said.

In 1995, Bachus fought to have the Montevallo cemetery included in a new bill, which called for 12 new national cemeteries. “It took 15 years” to become a reality, he said.

“It was the second one built, and I’m so thankful for it. We now (have) veterans from every war buried there,” he said. “They call it the Arlington of the South. That’s what the head of the VA called it when he was here.”

Others have compared it to Gettysburg, Bachus said.

Bachus ticked off other Alabama-specific accomplishments he’s proud to have had a part in making happen, like the Cahaba River Wildlife Refuge, the Northern Beltline and Corridor X.

“Some complained they wouldn’t be finished in our lifetime, but you have to start somewhere,” he said.

On a world scope, Bachus said his work to provide debt relief to impoverished countries is something he’s also very proud of.

“We went into countries where we made loans to them for military hardware. Without exception, every one of those countries was run by a dictator,” Bachus said. “What we were doing was outbidding the Russians, but we impoverished those countries because they were spending half or more of their revenue on paying back just the interest on the loans.

“Those countries had high death rates, lots of instability. They had tremendous health problems and were spreading those diseases to tourists. There was lots of animosity towards us. People were saying, ‘This dictator killed my family and you are asking me to pay back what you loaned him?’ And a lot of the money ended up in Swiss bank accounts.”

However, in impoverished countries is where terrorist organizations thrive.

“Do you know who has the lowest literacy rate on earth? Afghanistan,” Bachus said.

“So, we said to those African nations and some in Asia, if you will take that money and use it on education and health care and rule of law and establishing a court system and sanitation and you document that you are spending that money in those ways, you can do that as opposed to paying us interest, but you have to do that and you have to form a democracy,” Bachus said.

The result is, slowly but surely, lots of success.

“In lots of African countries, the literacy rates have gone way up and we are beginning to sell into those countries,” he said.

Not everyone gets a thank you letter from rock and roll legend and human rights activist Bono, but Bachus did.

In the letter, Bono thanks Bachus for his work to provide debt relief for African nations, telling him that the plan has led to 51 million children going to school now there.

“You made that happen,” Bono writes.

“I love railroads. I was a railroad lawyer, my granddad was a railroad engineer and I represented a few railroads. It was the most fun thing I ever did,” he said. “I idolized my grandfather. He was an engineer on a passenger train, the Southerner, that ran from New York to New Orleans and he ran from Atlanta to Birmingham. He would put me in the dining cart when I was seven or eight years old. I just have a fascination with them. So, serving on a board of directors of a railroad or railroad association, perhaps. There are no vacancies on those that I know of right now, but who knows,” he said.

One thing he won’t do is retire.

“Every time I come home, there’s this list of things Linda has for me to do. I work harder at home than I work anywhere else,” he chuckled. “After three days at home, Linda would ask me if I don’t have something else to do.”

No injuries after Pelham shooting

The Pelham Police Department responded to an incident in the city’s Chandalar neighborhood on Dec. 21. (File) By NEAL WAGNER... read more