First Marine Group in Afghanistan has a DAR Christmas 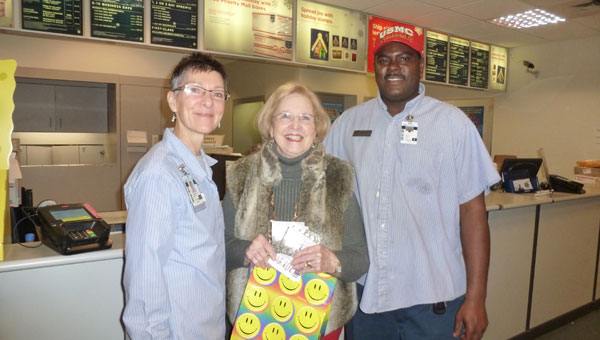 The First Marine Group deployed in Afghanistan is celebrating a bittersweet Christmas far from home but not forgotten, thanks to Lucy Carpenter, who spearheaded a Christmas drive for them.

Carpenter lives in Alabaster and is the wife of a retired Air Force Colonel and daughter and mother of soldiers. She knows first-hand how hard holidays can be for the military. For years she has chaired Shelby County’s David Lindsay Chapter of the Daughters of the American Revolution yearly Christmas giving to the military.

The DAR collects holiday treats such as: popcorn, beef jerky, toiletries, books, games, hot chocolate, Starbucks and Dunkin Donuts coffee, cookies, hard candy as well as money for postage. This year Carpenter went to a marine recruiter’s office and asked for a group to adopt.

“The recruiter suggested the First Marines in Afghanistan,” Carpenter said. “I read every week at Creekview Elementary to Ms. Austin’s first graders. The children made 50 precious cards for the troops. One child drew a heart and said ‘I love you soldier.’ Another said, ‘I appreciate you protecting me. I love you so.’ The sweet cards just made me cry. They were adorable.”

Carpenter also enlisted the Alabaster and Pelham seniors to help collect items for the marines. Also, the Alabaster Ladies Sewing Group made lap pads for the veterans at the Pell City veterans’ home where Carpenter sings with a group that entertains them.

“I went inside and asked for help. Keith Scott came out to my car and carried all the boxes in for me. In talking with him I learned he was an Army brat and served in the Marines from 1989-1994 deployed overseas as well in the US. While he was working with the boxes, Marlene Abate processed all the labels. They just took over. They told me, ‘Bless you for doing this.’”

“Just a little piece of mail from home means so much because you feel no one knows you are there,” she added. “God bless our military; they are not forgotten.”