Chelsea store stocks old and new for the New Year 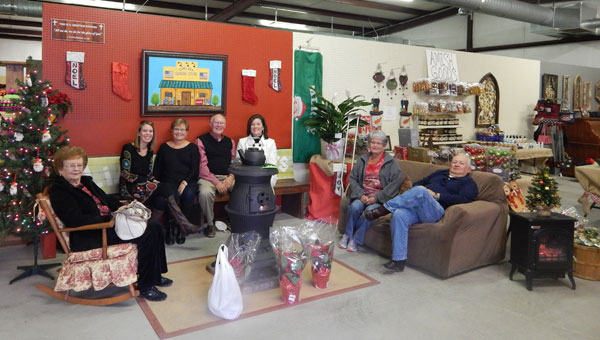 When Chelsea City Councilman Dale Neuendorf was a child, he loved spending time at his grandfather’s old country store in South Carolina.

Today, as an adult, he has one of his own in Chelsea.

Noting that Chelsea did not have a general store, although the town continued to grow, Neuendorf felt a general store would fill a need in the community, he said. And it would be fun to own and operate.

Struck with a creative idea around 3 a.m. one day, Dale did a quick sketch of how he wanted the front of the building to look. An artist friend filled in with paint to give a mural artist an idea of how to paint it. The results hang on the wall of a seating area in the store.

Dale said they plan to have free popcorn in the afternoon from an old-fashioned popcorn machine. He hopes to replace the current for-sale heater with a functional wood-burning one in the seating area, and perhaps set up a checker board. He wants it to be a real gathering place for the community, like the old-fashioned general store where people drop in, sit and visit; have a snack and cold drink or coffee; and shop for things like hardware and tools not found in other local stores.

He noted that the store is also convenient for people traveling U.S. 280.

“We’d like to thank everyone who came,” Neuendorf said. “We’re proud to be part of such an awesome community!”