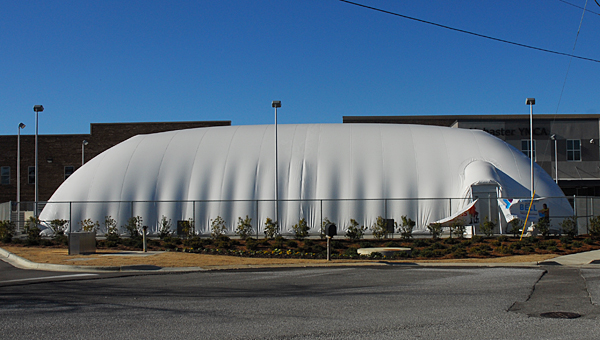 On particularly chilly days at the Alabaster YMCA, Executive Director Rhonda Elmore often takes trips outside the branch’s main building to warm up.

“The bubble is the warmest spot in the Y,” Elmore said with a laugh.

Regulars at the Alabaster and Inverness YMCA branches and drivers on U.S. 280 and Alabama 119 likely have noticed the large white domes towering over the branches’ outdoor pools.

As colder weather began arriving in Shelby County a few months ago, the two YMCAs installed enormous inflatable bubbles over their pools to allow patrons to continue to enjoy swimming regardless of outdoor temperatures.

“We keep the water at about 83 or 85 degrees, and we keep the air temperature at about 90, just to make sure it stays warm when it’s really cold outside,” Elmore said. “It really feels like summer in there.”

Elmore said it takes a crew of about 40 to stretch the deflated dome across the pool and put it into place for inflation. 2013 marked the first year the new Alabaster YMCA location on Plaza Circle had a pool, so the branch recruited a little extra help to ensure the dome went up smoothly.

“We actually had the fire department come out and help us this year, which was a huge help,” Elmore said.

Without the domes, the two YMCAs would have to have indoor-only pools, Elmore said. The only Shelby County YMCA without a pool dome is in Pelham, as the Pelham branch has indoor and outdoor pools.

“It’s a new concept for everyone,” Elmore said, noting people have come into the Alabaster YMCA just to ask about the huge white inflatable. “If you’ve never seen it before, it’s definitely surprising.”