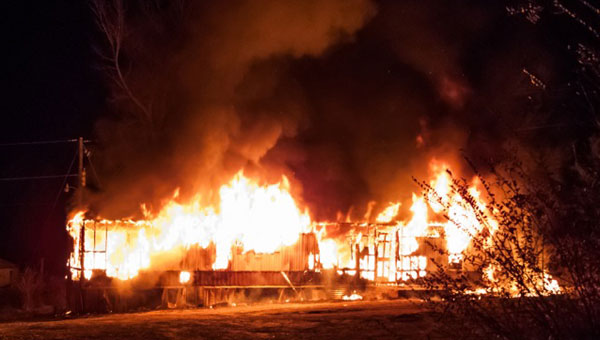 BRIERFIELD—Shelby County’s newly created First Battalion responded to a structure fire Wednesday, Jan. 22 at 10:29 p.m. This is the eighth such incident the group has responded to this year.

According to Brierfield Fire and Rescue Chief Spruce McRee, the string of fires do not have a singular cause.

“As far as I can tell they are mostly all accidental with different circumstances,” he said. “We don’t know the actual cause on several of them. Seems like plain old bad luck.”

The unit was paged to the Jan. 22 structure fire in Brierfield on Tomas Fulgam Drive. Upon arrival, the units found a single-wide mobile home engulfed in flames. The mobile home was occupied when the blaze began, but all of the residents were able to get out safely. A faulty space heater is suspected to be the cause of the fire, McRee said.

Twenty-five firefighters from Brierfield, County 17, Dry Valley, Montevallo, Pea Ridge and West Shelby worked to ensure that the flames did not spread to the surrounding wooded areas and threaten other nearby structures. Once the surrounding area was protected, the fire in the structure was extinguished.

It’s all downhill from here: downhill racer, that is [COLUMN]

By DREW GRANTHUM/Sports Writer I have many great goals in this life. One of which is to win a Pulitzer... read more