Stranded at school: ‘I knew I wasn’t going home’ 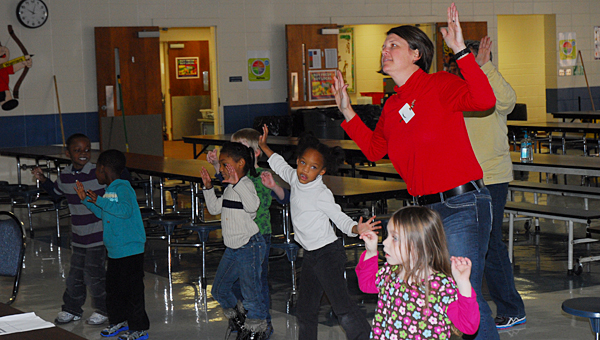 Creek View Elementary School kindergarten teacher Sarah Young leads students in a dance in the school’s cafeteria on Jan. 29. Young and the students were among the dozens of students and adults stranded at the school overnight on Jan. 28. (Reporter Photo/Neal Wagner)

When Alabaster school bus driver Butch Roberson left his house shortly after 10 a.m. on Jan. 28 to pick up his bus and transport students home early, he could knew he probably wasn’t coming home for the night.

“It took me until after 11 a.m. to get here,” Roberson said as he stood in a hallway at Creek View Elementary School on the morning of Jan. 29. “When I left, the conditions were such that I knew I wasn’t going home last night. I hoped we could at least get the kids home before it got bad, though.”

After the first wave of children loaded their buses at about 11:30 a.m. on Jan. 28, Roberson was waiting for his bus riders to board when the school system canceled all bus routes due to rapidly deteriorating road conditions throughout the city.

“We didn’t even make it out of the parking lot,” Roberson said. “The kids had to go back to the school.”

A similar scene played out across Shelby County, as parents rushed to pick their children up from Shelby County and Alabaster City schools. Many children were able to make it home or to a friend’s house, but thousands of students and teachers were stranded for the night as icy roads became impassable.

At Valley Elementary School in Pelham, about 35 students and 25 faculty members were forced to stay at the school overnight.

“We had a couple of the little girls who teared-up a few times. They just wanted to go home,” VES Principal Linda Campanotta said as about 10 students watched a movie in the school’s library about 11 a.m. on Jan. 29. “But we kept reassuring them that everything was going to be OK and that everything was going to be fine. The teachers have been amazing.”

Lunchrooms at each school prepared meals for stranded kids and faculty members while school administrators formulated “camp” itineraries for children still at the schools the morning after the snowstorm.

By CASSANDRA MICKENS/Associate Editor CALERA — Calera emergency responders worked around the clock transporting children from their respective schools to their... read more