‘Holding history in their hands’ 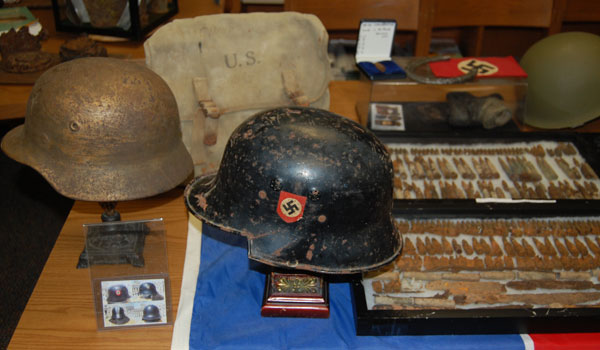 COLUMBIANA—All 140 sixth graders listened with rapt attention as David Livesay told the story of his grandfather, Charles Bandy, who crash landed in a glider plane in World War II and came through the sides of the aircraft, burning the skin off of his shins. The pilot of the glider was decapitated. Bandy went on to complete his mission and be awarded the Bronze Star.

Livesay, along with his daughter Aimee and her friend Jake Souder, shared this and many other stories and artifacts at Columbiana Middle School Tuesday, Feb. 4.

Livesay also told the story of his paternal grandfather, Charles Livesay, who was shot in a field where he remained for two days until allied forces found him. He was flown back to the United States and awarded the Purple Heart.

“He died with German shrapnel still in him,” Livesay said.

Livesay’s collection of World War II artifacts is extensive, in part because he once lived in Germany.

“Aimee’s mother was in the air force and was stationed over there for nine months,” he explained.

At Columbiana Middle School, Livesay laid his collection of artifacts out on the table, and he encouraged the students to examine everything and touch the sturdier items.

“It’s very special for the kids,” he explained. “They’re holding history in their hands.”