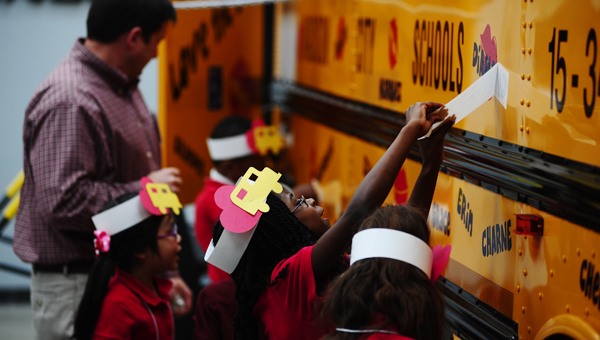 Students from the Alabama Institute for Deaf and Blind place decals on a school bus during the Love the Bus event on Feb. 4 in Pelham. (Reporter Photo/Jon Goering)

PELHAM – For the about 30 bus drivers from across the state gathered at Pelham’s Transportation South headquarters on Feb. 4, this year’s Love the Bus carried a little more weight than it has in previous years.

After a winter storm slammed much of central Alabama only a week before, state and local school leaders said the event gave them a perfect opportunity to praise bus drivers for helping to keep the kids safe during the severe weather.

Feb. 4 marked the fourth Love the Bus event hosted at Transportation South, which sells school buses to school systems across the state.

The Alabama Department of Education also named Madison County Schools bus driver Douglas Ray Edwards as the 2014 Alabama Bus Driver of the Year for providing specialized care for a special needs student who rides his bus every day.

A group of students from the Alabama Institute for Deaf and Blind provided musical entertainment and decorated a Madison City Schools bus with decals displaying their names.

“Today, it’s important to recognize and to pay honor to the bus drivers and the kids they serve,” Snowden said. “I don’t know that the snow adds any extra weight to today. We are just highlighting the work they do every day.”

Lightsey said the snowstorm demonstrated the character of the state’s school bus drivers, as many kept children safe as road conditions deteriorated and some even stayed at schools overnight to help care for children snowed in at school.

“Last week, we saw instances of not only bus drivers, but many others as well willing to help people out,” Lightsey said. “It’s so uplifting to see that.”