High school senior student-athletes from across Shelby County put pen to paper Feb. 5, as they signed letters of intent to play their respective sports collegiately. They are, as follows:

The Eagles kicked off the day at 11 a.m., with three football players inking letters to play. Ronnie Clark agreed to play for the University of Alabama, Jordan Bishop signed with Birmingham-Southern and Tyler Harrell signed with Tennessee Tech.

The Jaguars boasted 18 combined signees in eight different sports. In football, Dalton Brown signed with Newberry College, Phillip Brown with Tuskegee, Devin Pughsley will suit up for the Kennesaw State Owls and Jervontius “Bunchy” Stallings agreed to play for the Kentucky Wildcats.

In baseball, Matt Berler signed with Meridian Community College as did Josh Rich and Tristan Widra signed with Samford.

Swimmers Will Freeman and Maddie Wolfarth will attend the University of Alabama and the College of Charleston, respectively.

Jacob Laatsch signed a letter of intent to take to the basketball court next season in a University of West Florida Argonauts’ jersey.

Morgan Reed will continue her career in South Bend, Ind., as she signed to play softball for the Notre Dame fighting Irish, while javelin specialist Will Edwards signed a scholarship for track from the University of Alabama.

Kingwood’s C’Yontai Lewis signed a letter of intent to play for the Florida Gators Feb. 5. (Contributed)

Two of KCS’s gridiron greats sealed their collegiate futures on Feb. 5; C’Yontai Lewis agreed to play for Coach Will Muschamp at Florida, while Montez Haynes signed with Campbell University. 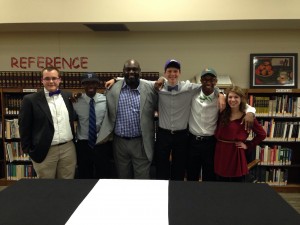