Alabaster is looking to be the first city in Alabama to form a designated Main Street Medical Mile district over the next few weeks after a City Council member recently brought the idea to city officials.

Through the program, Alabaster is working to add banners along U.S. 31 between the Euler Foot Clinic and just north of the Mash Medical Supplies business by early March, and is planning add an online directory and map of the medical offerings along the mile, said City Manager George Henry.

Henry said the program also will be featured during upcoming Alabaster and Greater Shelby County Chamber of Commerce meetings.

Ward 3 City Council member Stacy Rakestraw brought the medical mile idea to her colleagues in Alabaster after visiting family in her native Jonesboro, Ark., over the holidays.

“Jonesboro has a large hospital, St. Bernards, and I saw a big billboard that was advertising the medical mile around the hospital,” Rakestraw said during a Feb. 11 interview. “As soon as I saw it, I said ‘That would fit perfectly in Alabaster.’”

Alabaster Industrial Development Board Director Cam Ward and Alabaster Mayor Marty Handlon were quick to jump on board with the project.

“I believe Alabaster will be the first city in Alabama with that designation,” Ward said. “I think that is going to distinguish Alabaster a lot from other communities in the state. We have such a high concentration of medical services. You can find everything you need.”

Handlon said the designation, which could one day include a billboard on Interstate 65, will help to support the city’s current medical offerings while possibly attracting new businesses and patients.

“There are so many people who probably go on down I-65 into Birmingham, and they may not even know that we offer those (medical) services,” Handlon said. “It’s just a way to make sure the message is out there for medical groups and patients that aren’t in Alabaster. You don’t have to go all the way to Birmingham.” 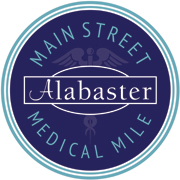