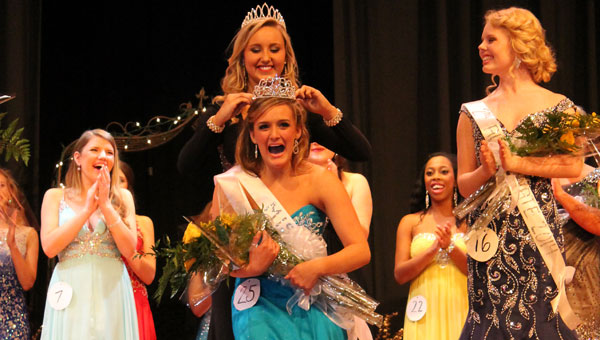 Lydia Cobb is named Miss PHS 2014 during a Feb. 15 pageant at the school. (Contributed)

“Lydia, what teacher has made a significant impact on your life?” I asked.

“My theatre teacher, Jamie Stephenson, has taught me so much about musical theatre—the career that I want to pursue. More than that, I am who I am today because of the trials she’s walked through with me. It’s rare to have a teacher that has such a personal impact on a student’s life these days and I do—I love her,” PHS senior Lydia Cobb said.

Cobb answered the question confidently, but also candidly. She seemed to know that she would name Mrs. Stephenson as that teacher who helped her to find direction for the next phase of her life; however, Cobb seemed to surprise even herself when her sincere appreciation for this devoted teacher bubbled to the surface.

Miss PHS candidates interview with pageant judges on Saturday morning. After each girl’s interview, she receives a list of questions. Should a candidate make it to the finals, she knows she will have to answer one of these questions on stage Saturday night.

The questions cover a broad array of topics. This year, thanks to a tie, Miss PHS finalists increased from the traditional top 10 to a top 12. Thanks to the snow, these girls had only one day to practice their placement on stage.

Seeing the girls on stage for the first time each year is breathtaking. How do judges choose a winner from such a lovely and poised group? Hearing the question responses seems to settle the judges’ decision. While there were many wonderful responses this year, Cobb’s sincerity and good humor impressed the judges. The girls competing for Miss PHS chose Cobb as their Miss Congeniality only moments before the judges named Lydia Cobb as Miss PHS 2014. Two nights before, she served selflessly behind the food tables at Write Night.