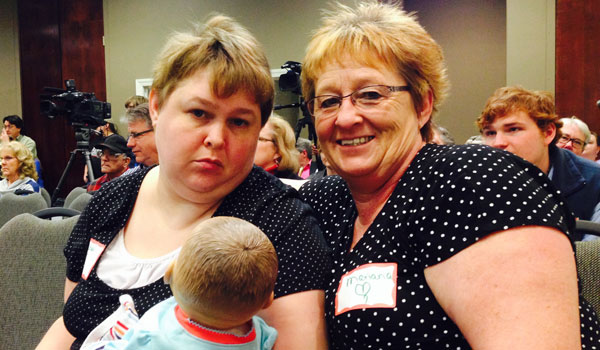 Mariana Daugherty feels the CBD oil would “definitely” help her daughter, Rachel Thomason, who has suffered from seizures since she was 18 months old. (Ginny Cooper / For the Reporter)

PELHAM—Barry Yarbrough was one of hundreds of people rallying March 1 in support of cannabidiol (CBD), an oil derived from the marijuana plant, which has proven to be an effective in treating many seizure cases in young adults.

Yarbrough’s 14-year-old granddaughter, Allie Swann, her parents and two brothers have relocated to Colorado so that Allie can use medication.

There has been an immense improvement in Allie’s condition since she’s taken the drug, Yarbrough said.

“She’s walking without a limp and she hasn’t had any more drop seizures,” Yarbrough said.

Though the drug has changed Allie’s life, Yarbrough and his wife Lageita are ready for the drug to be legalized in Alabama so their family can come home.

“We want them home,” the Yarbroughs said.

Mike Ball, a member of the Alabama House of Representatives and former state trouper, wrote and sponsored the bill supporting the medication commonly known as Carly’s Law, after the 3-year-old daughter of Dustin and Amy Chandler who has a rare genetic disorder that causes seizures, which cannot be controlled by current medications.

“I’m not just for (Carly’s Law), I believe in it,” Ball said. “This is not like anything I’ve ever worked on. This is a spiritual issue driven by compassion.”

The Rev. Troy Tatum, pastor of First Christian Church of Birmingham on Valleydale Road, attended the rally with his family in tow.

“We need to get the kids the help they need,” he said. “I think this is a no-brainer. I don’t see any reason to stop this law.”

Pelham Mayor Gary Waters also voiced his support for the bill: “What you’re a part of today is the hardest thing in Alabama—we’ve got to educate the ignorant.”

Pelham police chief Tommy Thomas spoke in support of the bill, and said that the medication is “something that works.”

“You’ve got a police chief up here supporting Carly’s Law, and it’s a derivative of marijuana,” he said.

Heather Jackson, executive director of the Colorado Springs nonprofit Realm of Caring, explained how the medication changed her son’s life.

After starting the medication in July 2007, Jackson saw dramatic results in her son’s behavior. Due to the medication, her son is now able to talk, eat and is learning his colors and numbers.

“In three days, Zachi will be 17 months seizure free,” Jackson said, inciting rousing applause. “I’m getting to meet my son for the first time.”

Joel Stanley, one of the brothers who cultivate the special strain of marijuana called Charlotte’s Web from which the medication is derived, explained the properties of the strain, which is extremely low in tetrahydrocannabinol (THC) and high in cannabidiol (CBD). Due to the low THC content, the strain does not produce the intoxicating effects of marijuana.

Dr. Pippa Abston, a pediatrician in Huntsville, also spoke out in support of the bill.

“I am amazed at the studies,” she said. “We could not find any bad news about CBD.”

Calera’s Connor Bush looks to throw across the diamond in a March 1 matchup with Thorsby. (Contributed/Brandon Sumrall) By BRANDON... read more