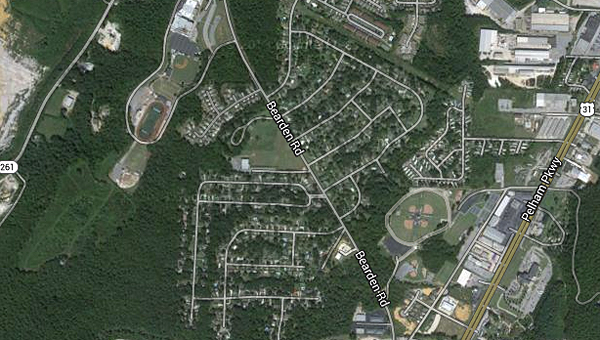 The Pelham City Council agreed to fund a hydrology study along Bearden Road near Pelham High School during its March 3 meeting. (Contributed)

Pelham leaders will look at ways to possibly combat flooding along Bearden Road after the City Council voted to fund a hydrology study along the road during its March 3 meeting.

During the meeting, the council voted unanimously to pay the Goodwyn, Mills and Cawood engineering firm $31,900 to conduct the hydrology study near Pelham High School, the Cedar Cove neighborhood and along Bearden Road.

City Council President Rick Hayes said the study “may not necessarily solve the problem,” but said it will give the council a better understanding of the flooding issues.

“That area is not always though of as a major flooding area, but we do have a lot of flood problems there,” Hayes said during a pre-meeting work session. “This is an attempt to figure out exactly what the problem is and what we can do to fix it.”

Hayes said the cost of the study was included in the city’s 2014 fiscal year budget, and said the price came in cheaper than budgeted.

Pelham Mayor Gary Waters said heavy rains often cause flooding in a field in front of Living Hope Baptist Church, and said homes in Cedar Cove have been damaged in past flooding incidents.

“We are trying to see if there’s anything we can do to help improve that area,” Waters said.

Hayes said the results of the study may allow Pelham to pursue federal grants to help fund drainage improvements in the area, similar to the Federal Emergency Management Agency grants the city received to help improve drainage along Shelby County 261.

According to Goodwyn, Mills and Cawood’s contract with the city, the company will “recommend solutions” to each drainage issue identified in the study.