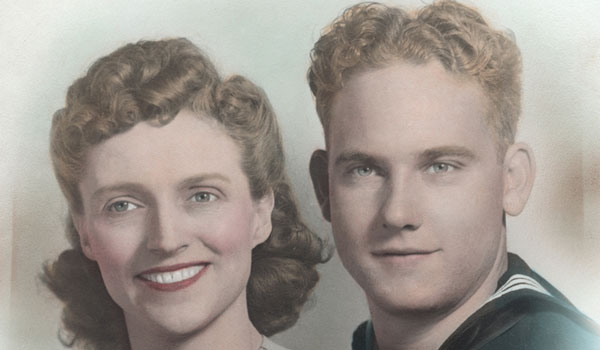 A picture of Jake and Ludie Carr taken on their honeymoon during WWII is one of the items on display at the “Alabama Voices” exhibit (contributed).

COLUMBIANA—Columbiana resident Madelyn Carr Bonnett, the only child of Jake and Ludie Carr, wanted to ensure her father’s WWII artifacts were protected, appreciated and taken care of forever.

“I’m an only child, and I don’t have any children,” she explained.

It was this desire that prompted Bonnett to donate the memorabilia to the Museum of Alabama’s exhibit “Alabama Voices,” which opened Feb. 15.

Though Bonnett donated a number of artifacts, it was Carr’s Bible, which he carried everywhere during the war; the American Flag presented to the family at his death; the Bronze Star Medal he won in battle; a photo of Jake and Ludie taken on their honeymoon during the war; the I.D. pass Ludie used during her time in California as an airplane parts inspector; and a handmade quilt that are currently on display at the museum.

Carr’s wife, aunt and grandmother made the quilt shortly after he returned from the war, and depicts all of the significant events of his Naval service.

“My father didn’t really talk about the war at all. If it hadn’t been for that quilt I never would have known where he was,” Bonnett said, recalling hours spent pouring over the quilt as a child.

One of the squares of the quilt depicts Carr’s service in the Battle of Tarawa, where he earned the Bronze Star Medal on display, awarded to Carr “for heroism and meritorious achievement as a member of the Beach Party of an assault transport during the assault on and capture of Tarawa, Gilbert Islands.”

The paperwork explains that Carr worked for three days “under great difficulties and harassing sniper fire” to unload badly needed ammunition and supplies for the soldiers.

The Bible on display traveled with Carr throughout his time in the service, and bears an inscription, which reads, “presented to one of the sailor boys in the U.S. Navy by one of the ladies in the Fraser Home. I am praying for you and please read Bible daily.”

Carr followed her advice, and carried the Bible with him throughout the war, his daughter said.

“It even has water damage at the bottom from when his ship was torpedoed at the Battle of Tassafaronga,” Bonnett said. “He had to abandon ship. He was in the water for a while until another ship picked him up.”

“Alabama Voices” is a permanent installation at the Museum of Alabama, ensuring that thousands of Alabamians will be able to hear Jake and Ludie Carr’s unique story.

“(These items are) my prized possessions, but I wanted them to go somewhere where people would appreciate them,” Bonnett said.