Profile: Keeper of our past 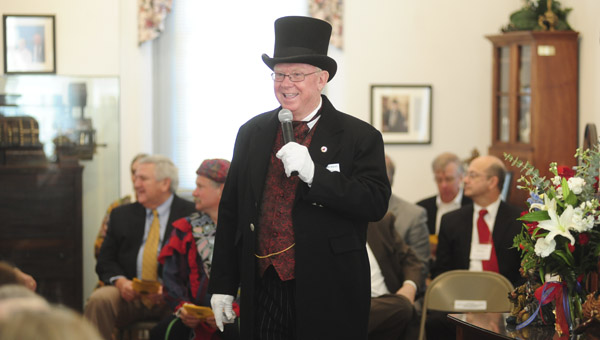 He’s the keeper of Shelby County’s most historic treasures, but if you ask most anyone in Shelby County (or the state of Alabama, for that matter), Bobby Joe Seales is a treasure himself.

Fifteen years ago, Seales intended to fill in for a sick employee for a day or two at the Shelby County Museum and Archives in downtown Columbiana. What was to be a temporary stay became an executive directorship with perks such as serving as a parade grand marshal while donning a top hat and a coat with long coattails, emulating the dress of a bygone era in one of Alabama’s eldest counties.

“That’s how everybody knows me,” Seales said with a proud chuckle, showing off a bookmark-sized museum brochure bearing his portrait in full garb complete with white gloves.

But the perk of all perks, Seales said, is the light bulb moment, that instant when a researcher finds an elusive piece of the family puzzle, and, in a broader sense, the local history puzzle.

“To see people when they find something they’ve been researching … The joy it brings …” Seales said. “It’s addictive.”

Seales is set to retire as executive director of the Shelby County Museum and Archives effective as soon as a successor is found, yet will continue to serve as president of the Shelby County Historical Society until his new term expires in 2015. Seales’ definition of retirement is different from, say, Webster’s. He is by no means slowing down. If anything, the Shelby County-born and reared 67-year-old is revving up.

“It’s a shift to more statewide responsibilities,” Seales said of his retirement. “We’re trying to find someone to take over, so if you know of anyone interested who will work with no pay …”

Seales’ Shelby County roots date back to when the county was formed — Feb. 7, 1818. He recites the date as if it were his birthday.

“Shelby County is older than the state of Alabama, which gained statehood in 1819,” Seales said with a teacher’s tone.

“I’m thankful the good Lord did not let me be born back then. I know those times had to be hard,” Seales said.

Seales is the youngest of six children born to Charles and Naomi Seales, and grew up to graduate from Thompson High School and Alabama College (now the University of Montevallo) in 1963 and 1967, respectively.

Knowing Seales now, one would assume he studied history in college, but he majored in mathematics. He went on to accept the only job he ever he’s ever had as a corporate credit manager and internal auditor for the Indiana-based National Temperature Control Centers, Inc. Seales was among the first NTCC employees to work outside headquarters. He chose to stay in Alabama to look after his parents.

Family ties were a hot topic among the Seales crew. The questions of if and how so-and-so was related to so-and-so prompted Seales to research his mother’s roots. He published his findings in a book titled “Massey-Stamps Ancestors” in 1970, shortly after he wed an Alabama College co-ed named Diane Brandenberg. The couple, who reside in Alabaster, will celebrate their 45th wedding anniversary this year.

“To him, if you don’t preserve history, it’ll be lost and future generations won’t have access to information at a later date,” said Diane, who was recently elected historian of the Shelby County Historical Society. “He’s made it a top priority to preserve as much history as he can … That’s his main goal in life.”

Seales began building his reputation as a local historian while continuing to trace his lineage back to the Revolutionary War. Following the release of his book, Seales compiled a history of the city of Pelham to be included in the unveiling of the new city map in 1973. He also worked with other Shelby County cities and organizations to compile community histories.

Seales retired with NTCC in 1992 as a corporate credit manager and internal auditor after 28 years of service. He then went on to acquire his real estate license. Seales had no interest in selling real estate, as he was more interested in learning how to buy rental properties for income. Then came the call to fill in for a few days at the Shelby County Museum & Archives.

“I’ve been so blessed,” Seales said. “The Lord sent me to Columbiana to work and I’ve made so many wonderful friends. They’re like family.”

Among those friends is an 80-plus-year-old woman who had traveled to the museum from Maryland seeking information about her mother. The woman gave Seales her mother’s name, but she wasn’t sure if it was her mother’s maiden or married name.

“Taking her mother’s first name and starting to see if that was her maiden name, I just pulled an obituary that had the same surname,” Seales said. “The obituary was on her mother’s father.”

The woman, Seales recalled, burst into and tears, and shared that she was adopted as an illegitimate child because her mother was not married when she was born. However, her mother had married before her father’s death.

“We have the funeral home death records and they are indexed. I pulled them and there was her mother listed and she was buried in the Columbiana City Cemetery just behind our building on Highway 47,” Seales said.

“I gave her specific information on how to get to the cemetery and how to go directly to her mother’s grave. She said, ‘I was not expecting to find my mother this easy.’ She couldn’t believe I was able to find it that quickly. But just to help her find that missing link she had for 80-plus years and see her finally get closure on her situation when she want to the cemetery to see her birth mother’s grave was well worth all my years here helping many people.”

The museum, housed in the 1854 Old Shelby County Courthouse at 1854 Courthouse Circle in downtown Columbiana (and listed onthe National Register of Historic Places since 1974), moved into the 21st century under Seales’ tenure. Computers were brought in for administrative and research needs, and old records and newspapers dating back to 1866 were digitized. Late last year, Seales acquired a state grant to purchase another microfilm reader for the museum.

Seales also wears a public relations hat, promoting the museum throughout metro Birmingham and building the museum’s brand as one of the few, and perhaps only, old Alabama county courthouses to be repurposed as a museum.

He beams with pride.

Seales said stepping aside as museum executive director is not a permanent goodbye, as he plans to volunteer when he can. But it’s time to take on a fresh challenge, and to share a saying Seales has repeated for years. Shelby Countians know it well.

“History not recorded is soon forgotten.”

Montevallo reliever Edward Brandsema picked up his third save of the year in a 5-2 win over UAH March 5.... read more