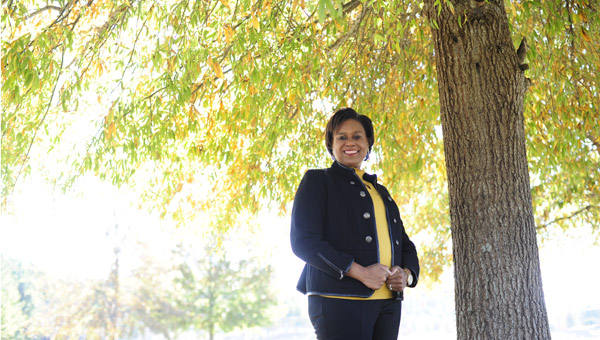 As Bridgette Jordan-Smith grows through this life, so does her concept of leadership.

Leadership is something we’re all capable of, she says, but the question is how do we go about it? Are we serving others or serving ourselves? Are we empathetic or egotistical?

These are questions we must ask ourselves often, regardless of rank or role.

“I’m reminded of a Bible verse, Matthew 20:28: ‘Even as the son of man came not to be ministered unto, but to minister, and to give his life a ransom for many.’ What are we doing to serve? How are we serving others?” Jordan-Smith said.

Born and reared in Vincent, Jordan-Smith, 44, is a Vincent city councilwoman and vice president of Leadership Shelby County, in addition to wife, mother, church secretary and child advocate.

Growing up in Vincent, population, 2,003, Jordan-Smith dreamed of the day she would leave her small hometown for life in the big city. The only problem was that she couldn’t escape her love for Vincent, or her desire to make her hometown a better place.

“I love my little town! There are great people here,” said Jordan-Smith, a 1987 Vincent High School graduate who returned home after earning her bachelor’s degree in child development from the University of Alabama. “Anyone that comes to our community talks about the friendliness of the townspeople and how welcoming everyone is. I always want to know who my neighbors are.”

Jordan-Smith is a hometown girl done good, working to fuse small town advantages with big city amenities. She was re-elected in 2012 to serve a second term on the Vincent City Council, representing District 2. Jordan-Smith jokes she was tricked into public service, first serving on Vincent’s Park and Recreation Board. Friends and family suggested Jordan-Smith run for a city council seat after she shared some frustrations. Jordan-Smith took their advice, running unopposed for her first term.

“When I moved back home, I immediately got involved in the community and it’s been interesting,” Jordan-Smith said. “I saw difficulties with trying to get things done at the park. I thought if I went to a different level, we could accomplish more.”

The city council has since unveiled a five-year master plan for the city’s new park, which includes larger fields, a skate park, outdoor exercise equipment and a splash pad for summer fun.  The council also is reviewing plans for a new community center nearby.

“We don’t want people to have to go to Pell City or Childersburg just to have a birthday party. We want their birthday party to be in our park or community center,” Jordan-Smith said. “We can have the things big cities have on a practical scale.”

Providing a better quality of life for families is vital to Jordan-Smith’s public service and professional work. She has dedicated her career to enriching the lives of children, most recently as field director of Bright Horizons Family Solutions. As field director, Jordan-Smith travels the country to establish child care centers with trained staffs.  Jordan-Smith previously worked as director of Bright Horizons’ Shining Stars Child Care Center at Mercedes-Benz in Vance and as manager of UAB’s Child Development Center in Birmingham.

“Growing up, we didn’t have much in our community, but we always worked for the children in the community,” Jordan-Smith said. “To make a difference in the lives of children has been my passion forever.”

Jordan-Smith’s passion for child development and education no doubt fueled her desire to be an involved parent at Vincent schools. She joined the local Parent Teacher Organization when her daughter, Bria, entered second grade. Jordan-Smith was later elected as PTO president and remained active in the schools until Bria’s high school graduation in 2012. Jordan-Smith also is affiliated with the National Association for the Education of Young Children and the Southern Early Childhood Association, organizations dedicated to improving quality of care and education for young children and their families through advocacy and professional development.

“The key to success for any child is parental involvement. I might have missed one field trip in 10 years,” Jordan-Smith said. “For you to know about your child’s teachers, to participate in activities, to know your child’s friends, that’s very important.”

Jordan-Smith is a member of the Leadership Shelby County Class of 2006, and stayed involved in the organization post-graduation.

“She was that wonderful alum who came back,” said Carol Bruser, who assumed the role of Leadership Shelby County coordinator during Jordan-Smith’s class.  “She always stays active in the program, and was appointed to the Board of Directors in 2007.”

Bruser added: “She’s one of those rare individuals who works so hard and so diligently to make things better. It’s the Bridgette Jordan-Smith Vincent Show on a daily basis, but it’s not just Vincent, she loves the county.”

Jordan-Smith, who will ascend to president of Leadership Shelby County in 2015, said she is fortunate to be among individuals who strive to bring about positive growth and change throughout the county she and so many other love.

“Shelby County is blessed to have such great leaders who are doing a lot of great things. To get to know so many leaders across the county has been wonderful,” Jordan-Smith said.