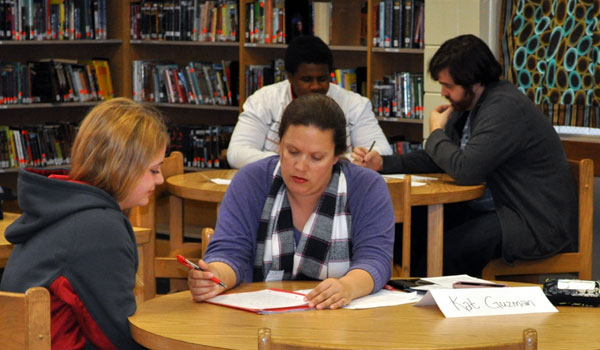 COLUMBIANA—Alabama author Skip Tucker held the audience at rapt attention with tales of the Civil War during the “Eat. Drink. Read. with Skip Tucker” event, organized by the Shelby County Arts Council on March 6.

Tucker spoke about his recent novel, “Pale Blue Light,” an espionage thriller set during the Civil War, which was released to great critical reviews.

In the novel, protagonist Rabe Canon, a fictional spy, begins to suspect foul play after Stonewall Jackson suffers a fatal wound at he Battle of Chancellorsville. Canon then begins a cross-country journey to discover the truth behind Jackson’s death.

It was Tucker’s interest in the “recent unpleasantness,” his favorite term for the Civil War, which fueled the concept for the book.

“I read everything about Stonewall Jackson I could put my hands on, and they say ‘write about what you know,’” Tucker explained.

Tucker describes Jackson as the “embodiment of honor, chivalry and courage,” but also points out his eccentricities, such as his penchant for eating lemons at all times of the day, his belief that his organs were out of balance and his theory that eating pepper made his left leg go numb.

Though the book is classified as historical fiction, Tucker stressed the historical accuracy of the novel.

“The book is historically authentic up until Jackson is wounded. I took pains to make sure that every ‘I’ is dotted and every ‘T’ is crossed with authenticity,” he said, citing period newspapers and eyewitness accounts as some of the material he used to ensure the historical accuracy.

Tucker said the idea Jackson’s death may have been an assassination came after reading many books about the general.

Though Tucker says the chance is miniscule, the idea sent him into a writing frenzy, and he wrote for 12 to 14 hours a day until the first draft was complete, which took approximately six weeks.

“If anyone could write a murder mystery into the Civil War, complete with a sexy spy worth of a James Bond novel, Skip Tucker is the one. His story has more plot twists than a Smoky Mountains road has curves,” wrote Lane Lambert, a reporter for the Patriot Ledger.

Tucker recently completed the first draft of his second novel, “Bloody Blue Moon,” a private-eye thriller set in modern-day New Orleans, and he has no plans to stop writing. Tucker said he plans to continue writing “as long as I can pull myself up to the keyboard.”

“Pale Blue Light” is available in paperback, hardback and ebook from NewSouth Books, Amazon, and many local bookstores.