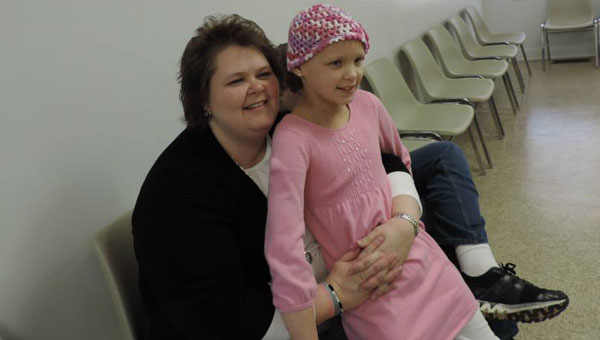 Ten-year-old Mollie Wilder’s life has been turned upside down since her diagnosis of childhood brain cancer last year. Frequent trips to Children’s Hospital, major brain surgery, radiation, chemotherapy and blood transfusions have consumed her life. But cancer just does not affect the individual, it affects those that love her too: her mom Renee’, dad Scott, brothers Stephen and Austin, as well as grandparents, aunts, uncles, cousins and a multitude of friends.

People know about the physical drain of a body, but rarely do people think about the financial drain. Renee’ had a thriving day care business in her home for years that helped supplement the family income. That business had to be put on hold for now as she devotes her time to Mollie’s care and that of her family. Money is tight with high gas prices and multitude of trips to Birmingham and the hospital.

Another crisis is the blood shortage in Birmingham. A call went out for Mollie’s needs and the community responded. But the blood shortage continues. The First Baptist Church in Columbiana is sponsoring a blood drive April 26 from 9 a.m. to 2 p.m.

A Relay for Life team has been formed in support of Mollie and Nena Creel Goode, who is fighting breast cancer. The team is called Shelby County B2, Brains to Boobs Relay for Life.

Mollie works tirelessly making bracelets to raise money. Bracelets are $5 available at Paw Paw’s Restaurant in Columbiana or send a check to Mollie at 1180 Highway 56, Wilsonville, 35186.

Team Mollie T shirts can be purchased at Teammollie.com or sending your check for $15 to above address. Deadline is March 14.

Last, Mollie will have an Origami Owl fundraiser with a party at her Wilsonville home on March 15 at 2 p.m. You can make orders through March 22 at: www.aprilnewman.origamiowl.com/parties/SherrieBooth218375/howtobuild.ashx.

So many changes, so many challenges – Renee’ sums it up perfectly, “Just to clear up any confusion anyone might have, I hate childhood cancer!”

By Phoebe Donald Robinson/Community columnist Ten-year-old Mollie Wilder’s life has been turn upside down since her diagnosis of childhood brain... read more