A 36-year-old man is being held in the Shelby County Jail without bond after he was arrested by Immigrations and Customs Enforcement agents in connection with a 2012 Louisiana murder. 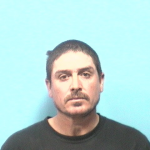 ICE agents arrested Francisco Valenzuela in Shelby County on March 11 on a warrant issued in 2012 by the Ouachita Parish, La., Sheriff’s Office. Valenzuela’s last known address was in West Monroe, La., according to his arrest warrants.

According to Shelby County Circuit Court documents, Valenzuela was wanted in connection with an Oct. 7, 2012, homicide in Ouachita Parish, and had allegedly been on the run since the incident.

Law enforcement agents then pinged the suspects’ cell phone location, which led officers to a residence in Houston. A federal task force responded to the Houston residence and located the suspects’ vehicle, but did not locate the suspects, according to the arrest warrant.

A witness in Houston said the three suspects allegedly were attempting to flee to Mexico. Valenzuela was located in Shelby County and was arrested on March 11, the same day a fugitive from justice warrant was issued on him by the Shelby County Sheriff’s Office.

Court documents did not list Valenzuela’s place of residence in Shelby County. As of March 12, Valenzuela was being held in the Shelby County Jail without bond awaiting extradition to Louisiana to face a charge of accessory after the fact to second-degree murder.