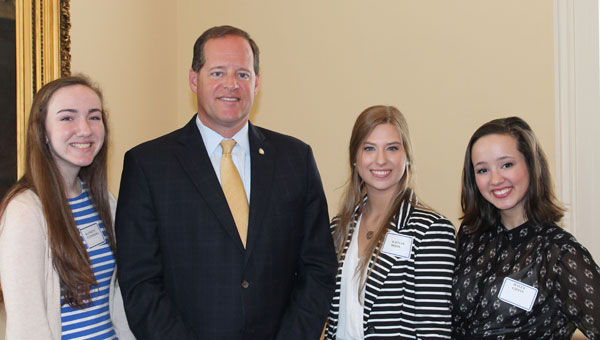 “The editor of the Black Warrior Review gave me a message for our editors,” said Haley Giffin.

One of PHS’s three winning writers who traveled to Writers’ Forum’s High School Literary Arts Awards Ceremony at the capitol in Montgomery, Giffin was the new owner of a prestigious poetry award—and this secret from the editor who judged the state’s literary magazine competition.

“Mrs. Nolen, you have to let me tell everyone in Lit Mag class tomorrow,” Giffin said.

The other two PHS winners, both for their nonfiction, Kaitlin Moon and Kathryn Clemmons, gathered around.

“He asked if we worked on ‘More than Words,’ and I told him I was on staff. He said, ‘Tell your editors they’ve done a fine job. Pelham’s Literary Magazine is one of the best high school magazines I’ve seen,’” Giffin said.

The girls were impressed. All were magazine contributors and two worked as staff members. These three work at writing with the ferocity of bulldozers. They’ve taken home papers with margins bleeding with questions. They’ve conferenced with me and been frustrated with their questions being met by my questions.

They’ve written drafts upon drafts only to go back to make a few more changes after hearing, “A piece this strong deserves a more powerful ending” or “I know what you mean, but I’m not sure an unknown audience will.”

These three are tenacious. They have grit, determination and the confidence that blooms when students are recognized for their hard work and talent. PHS seniors Kathryn Clemmons, Haley Giffin and Kaitlin Moon also have the distinction of being named among the best student writers in the state.

Giffin shared the prestigious praise in class to an appreciative audience. After studying their Lit Mag’s awards for runner-up in the state this year for both literary content and graphic design, the students returned to their work on the new magazine. Other students might rest and enjoy their great finish. This PHS staff chooses to work for the next win.