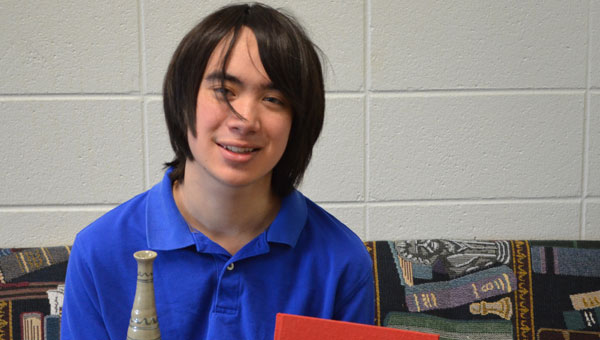 Cebastian Cardozo, a 2013 student visitor to Echizen, Japan, with a piece of Echizen pottery and a book of Japanese artwork. (contributed)

Since initiating the sister city relationship in 2008, citizens of Montevallo and Echizen, Japan have engaged in an ongoing educational and cultural exchange. Students from each city visit the sister city in alternate years to be immersed in a new culture, and Montevallo has been fortunate enough to host Taiko drummers and the past mayor of Echizen a few times.

“Echizen was a unique experience,” MHS junior Cebastian Cardozo said of his summer 2013 visit. “Japan is a beautiful country rich in ancient and modern pop culture. The people were friendly, and I was lucky enough to stay with an amazing host family.”

Now, a commercial component may be added to the sister city relationship.

Building on a connection based on a mutual love of pottery, Echizen is currently determining in what capacity Montevallo can assist in the promotion and sale of Echizen pottery. Although known for being home to over 300 shrines and temples, Echizen has a special type of clay in the area that led it to become one of the oldest pottery villages in Japan.

“After a recent visit, delegates from Echizen have reported back to their hometown,” Montevallo Mayor Hollie Cost said. “The International Association and pottery village are now determining what they would like to do next. One specific idea was to start with a show in Montevallo and then have other shows in other parts of the state and Georgia, and then keep a permanent exhibit in Montevallo. A local gallery is very interested in featuring the pottery. If Echizen decides to distribute pottery across the U.S., we will need to determine the best way to assist them, or if it would be in their best interest to ship the pottery directly.”

Though the economic aspect of this relationship may just be burgeoning, it is apparent that the sister city relationship between Montevallo and Echizen is vibrant and active, with a mutual cultural influence affecting citizens of both cities.

“I am optimistic this will result in a positive impact for Montevallo and Echizen,” Cost said. “I am also embracing the Japanese philosophy of moving slowly and with purpose. Success in business as well as deep personal relationships happens over time.”