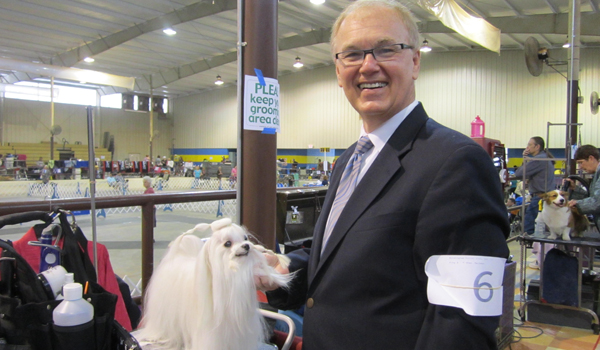 Jim Ray and his maltese, Mellie, was was awarded the title of Champion of Record at the AKC all breed dog show in Columbiana (Ginny Cooper/For the Reporter).

COLUMBIANA—Jim Ray developed a love for malteses more than a decade ago after rescuing two male, three-legged maltese dogs from a puppy mill that was shut down.

“Soon after, I broke my leg and spent most of the summer on my back porch. I watched them learn how to be dogs,” Ray said.

After having the dogs appraised, Ray developed an interest in the breed and began showing the dogs. His 16-month-old maltese, Mellie, was awarded the title of Champion of Record at the AKC all breed dog show in Columbiana.

Mellie was one of over 950 dogs from Massachusetts to Washington, Puerto Rico to Canada lined the floors of the Shelby County Exhibition Center for the annual AKC all breed dog show April 3 through 6.

“Everyday is a complete dog show,” first vice-president of the Birmingham Kennel Club and organizer of the event Daniel R. Bacon said, and throughout the day dogs are judged by a variety of criteria, which includes height, weight, color, nose and eye pigment.

Almost 200 breeds, from the beagle to the otterhound, are recognized by the AKC and approved to compete in AKC Companion Events and Performance Events, but some breeds are still waiting to be recognized.

The kooikerhondje, a small, spaniel-type breed of dog from the Netherlands, is currently classified as a Foundation Stock Service by the AKC, but breeders hope that by June the breed will be classified as a Miscellaneous Class Breed.

Dee Nichols and LaVon Culpepper, president and treasurer of the Kooikerhondje Society of America, bring their kooikers to dog shows across the United States in order to spread the word about the breed.

Culoeooer said he was browsing the Internet when he fist learned about the breed, and instantly knew it was the dog for him.

“I saw the picture, and I just knew,” Culpepper said. “This is the dog I’ve been looking for my whole life.”

Traywick named Teacher of the Month