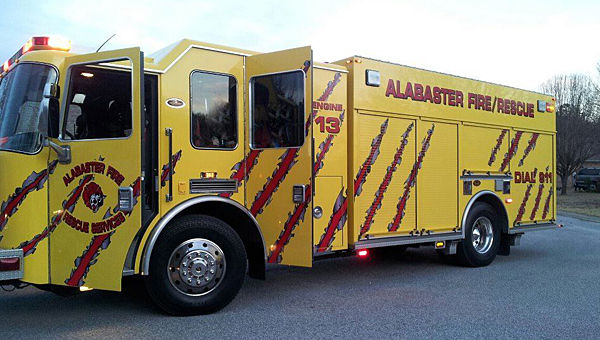 A tree fell across Shelby County 11 on April 4, damaging the undercarriage of Alabaster Fire Engine No. 13, pictured. (File)

ALABASTER – A “freak accident” on Shelby County 11 in Alabaster’s Simmsville community on the morning of April 4 took an Alabaster fire engine out of commission and closed the road for about 30 minutes.

Alabaster City Manager George Henry said Fire Engine 13 was returning from a call shortly at about 6:30 a.m. on April 4 when a tree fell across Shelby County 11 in front of the truck.

“I don’t know if it hit the truck directly, but it fell fast enough that they couldn’t stop the truck in time,” Henry said. “They ran up on the tree and it tore up the truck’s undercarriage. It was a freak accident.”

Henry said the tree blocked all traffic on Shelby County 11 until Alabaster Public Works crews were able to cut the tree up and move it off the road. No injuries were reported in the incident, and Engine 13 was towed to be repaired.

By MOLLY DAVIDSON / Staff Writer The man charged with the Jan. 5, 2013, robbery of Union State Bank on... read more