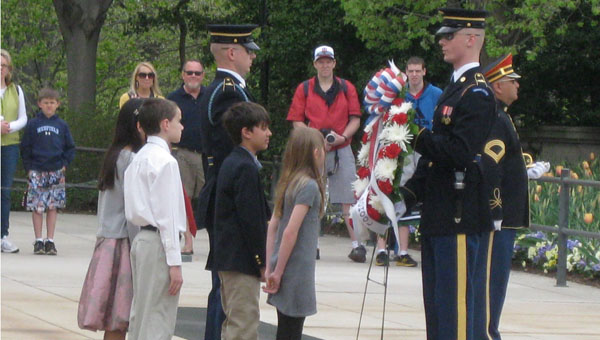 Several Valley Intermediate students participated in a laying of a wreath ceremony at the Tomb of the Unknown Soldier at Arlington National Cemetery during the annual school trip to Washington, D.C. (Contributed)f

“I’ve gone for the past 10 years,” said Powers, who spearheaded this year’s planning. “But, Valley has done it for close to 30 years.”

Powers has a full schedule planned for the fifth grade this year, packed with many of the things they have learned about in his class, which covers history from the Ice Age through Reconstruction, with a “lot of time spent on the 13 colonies.”

In less than one week, they will visit Jamestown, colonial Williamsburg, witness the changing of the guards at Arlington National Cemetery and tour the buildings and monuments of Washington, D.C.

“A lot of the kids are awestruck by the speed and size of D.C.,” Powers said.

But the trip isn’t all work, Powers stressed, it’s a lot of fun too. From hands-on activities to quizzes with prizes on the bus, Powers said the kids and the teachers both get to “let loose a little bit.”

“It’s the little things that make the trip, and its good for the kids to see that teachers can be human,” Powers said with a laugh.

Although the school trip is less than a week long, the memories are lasting.

“We have kids that come back years later and say how much fun they had,” Powers said.

The fifth grade trip to Washington, D.C., not only brings topics learned in class to life, it also seeks to expose the students to as much of the area as possible.

“It’s a fast-paced trip because our goal is to expose the kids to as many things as we can,” Powers said. “For some of them, it might be the only time they will go to D.C.”