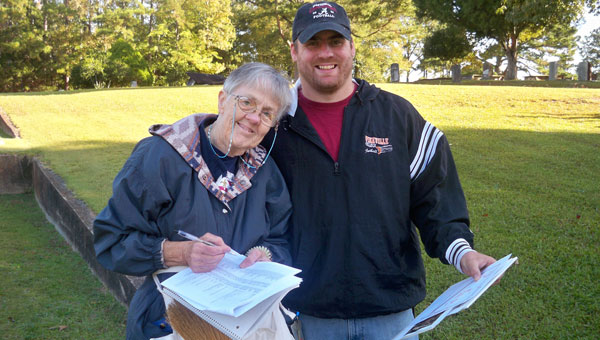 Latter-Day Saints volunteers Claudiann Tilton and Sean McKinley identify graves at the Columbiana City Cemetery. Tilton received the RSVP Spirit Award for her thousands of hours volunteering on this project and others. (Contributed)

A major restoration of the Columbiana City Cemetery located on both sides of Highway 47 outside Columbiana will culminate in a ribbon cutting ceremony Sunday, April 13, 2014, at 3 p.m.

The day will also mark the dedication of the informational gravesite map identifying the graves of Shelby County residents, some more than 200 years old. The mammoth project was three years in the making and the result of thousands of volunteer hours refurbishing the historic cemetery.

The initial work began as an Eagle project of Robert Justice, son of Bill and Beverly Justice of Columbiana, who made a list of the graves which is listed on the Shelby County Historical Society website. The current project was spearheaded by the Columbiana Ward of the Church of Jesus Christ of Latter-day Saints along with the Oak Mountain, Alabaster and Hoover LDS Wards, Emmanuel Temple Holiness Church of Alabaster, city of Columbiana, Alabama National Cemetery, Alabama Cemetery Preservation Alliance and others.

All the graves in the cemetery have been located, cleaned and repaired with landscaping updated and fences repaired. A large map detailing the location and names of the 1,600 graves has been made.

LDS member Ricky Harmon will be master of ceremonies at the ribbon cutting, held at the cemetery pavilion. Peter Johnson, stake president of the LDS Church will lead the opening prayer followed by Mayor Stancil Handley’s welcome.

Former Mayor Allen Lowe will tell the historical background on the cemetery. Robert Justice, Claudiann Tilton, George Sipploa and Rev. William Fitts Sr. will be recognized for their dedicated service to the project. Handley and Helen Dean will lead the ribbon cutting and Ted Urquhart, president of the Alabama Cemetery Preservation Alliance, will close the ceremony.

“We are often asked why we get involved in community service,” said LDS member Clem Muck. “We have strong convictions that we need to follow our savior and our heavenly father, and do what they taught us – love and serve our brothers and sisters. We expect no return commitments. We are all God’s children, and we all can work together for our mutual Salvation. So, that’s what we do – we serve.”