Three-on-three hockey could be double the fun [COLUMN] 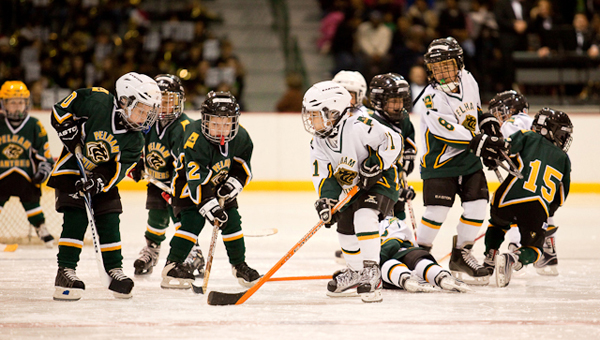 What could be better than some fun mixed in with learning? Nothing, and that’s what makes the 3-on-3 Hockey League idea seem so great. (Contributed/Randal Crow)

When I called Randy Murphy at the Pelham Civic Complex and Ice Arena two weeks ago just checking in, I was more or less trying to see how the “try hockey for free” program was going.

What I ended up learning about has to be one of the coolest things I’ve heard in a while.

What Murphy and the crew down at the PCCIC have brewing is a league that is designed to incorporate the fun and looseness of playing pickup hockey, while teaching fundamentals necessary to succeed at any level.

Oh, and for good measure, they’ve put their own twist on the game as well.

The Pelham 3-on-3 Hockey League will debut a little later this year, and looks like it could be one of the most interesting takes on the game of hockey in a while. I know Pelham’s probably not going to be the first league to have adopted this, but I have to applaud them for bringing it to Shelby County.

The league’s gameplay is just as the title suggests, with teams putting three players out on the ice. When I talked to Murphy, he said he wasn’t sure if it would be a forward and a defender along with a goalie, or what the positional layout would be. He made sure to state the main goal was to teach the game in a relaxed, fun setting while giving those playing the chance to compete for a league title.

Murphy said he planned to have nine players to a team. Each game would have two minute shifts per squad in eight-minute periods. Players from 8-U to 18-U can sign up, allowing players of all ages the chance to refine their game after the winter season is over.

I personally think it’s a great idea. It’s a unique concept, and in order for the hockey program over the PCCIC (there’s got to be a better nickname for it) to grow, it needs inventive ideas to be presented, and people to buy in to those ideas.

I’m all for inventive ideas, and while I personally can’t compete, you’d better believe we’ll be there to cover it.