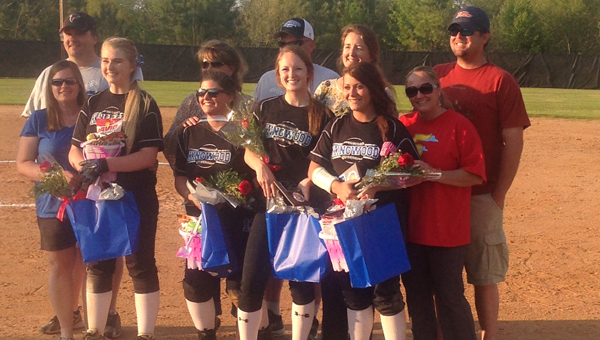 The softball team opened the festivities, as beefore the game, seniors Taeler Holland, Madelyn Pearce, Jacie Willoughby and Beth Mason were all recognized for their hard work and dedication to the KCS program.

Once the game began, however, the celebrations were cut short as the Lions fell short to the Warriors, 12-6, despite a valiant effort. Holland threw a complete game, spreading 10 hits over seven innings. Holland allowed six earned runs, with four walks and 10 strikeouts. At the plate, Courtney Kendrick paved the way for Kingwood, going 3-for-3 with two two-run home runs and five RBIs. Holland posted a single and a double with two RBIs, while the other seniors each logged a hit. Addy Moncrief went 2-for-4 on the night.

While the softball team’s evening didn’t end as hoped, the baseball team and lone senior Montez Haynes had an offensive outpouring, taking the Warriors 14-3. Dillon Calhoun started on the mound, going two strong innings. Calhoun gave up no earned runs on two hits, with two walks and two strikeouts. Shiloh West entered the game in a relief appearance, going three innings and earning the win. Of 16 batters faced, West allowed one earned run on two hits and two walks while striking out three.

At the plate Garrett Jones led the Lions with five RBIs and two runs scored in a 3-for-3 effort, while Gage Sumrall went 2-for-2 with four runs scored, a walk and a hit-by-pitch.

Haynes went 2-for-2 with a walk, two runs and two stolen bases.

Head baseball coach Andrew Pearce said the win was huge, not just for the senior night festivities, but for the baseball team’s playoff chances.

“When things are going your way, it’s nice,” he said. “That being said, we’ve been in the other team’s shoes, and it doesn’t feel good to be there either. (It’s) definitely a huge boost. This is where we want to be; on an upswing coming out. All my guys are healthy, and growing each game.”

The Lions baseball team will take on Fort Dale Academy in the first round of the AISA playoffs April 18.