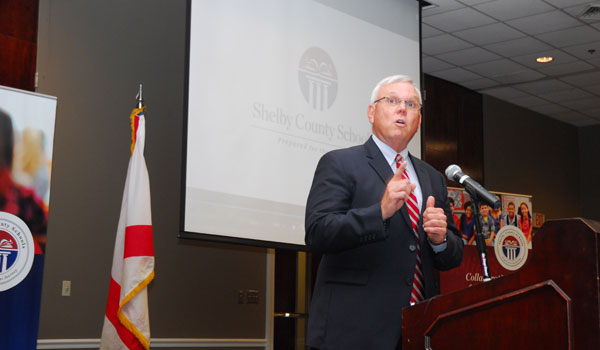 There was an air of excitement at the Shelby County Showcase Luncheon, where Shelby County Schools unveiled their new logo and tagline, which have been in the works for approximately a year.

The logo, designed by the Montgomery-based advertising agency Stamp Idea Group, bears an image an abstract representation of both an open book and a flame, with columns below.

“The open book signifies an unending quest for knowledge, while the flame is symbolic of the district’s goal to ignite a pursuit of life-long learning within each of its students. The columns…represent the district’s long-standing tradition of excellence and mission to equip every student with a strong foundation for success in life and learning,” according to a news release from the system.

The colors of the logo, which are the same as the American flag, signify that the district’s “greatest strengths is found in the diversity of the communities and students it serves,” according to the release.

The new logo will launch on the school system’s main pages April 16, according to Shelby County School’s Webmaster Dee Patterson.

Over the next few months, the school system will “change all coding” on the websites to make them more accessible for tablet and mobile users, Patterson said.

“It is time for a new look,” Patterson said.

“This (tagline) truly tells the story of our school system,” Fuller said.