Panthers sweep Prattville in opening round 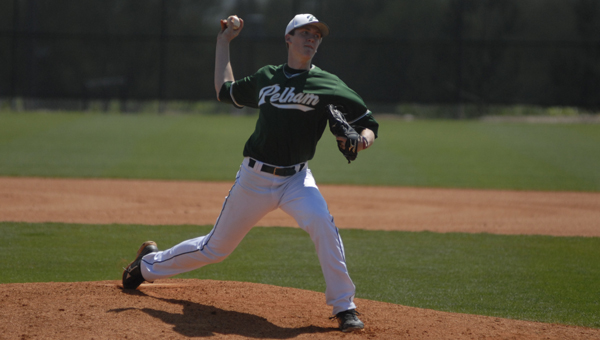 The Pelham Panthers swept the Prattville Lions in the first round of the AHSAA playoffs with a 3-2 win April 19. (Reporter Photo/Drew Granthum)

By MATT DuBOIS/For the Reporter

Pelham High School Panthers took on the Prattville Lions in what was a nail-biting game to open the AHSAA Class 6A playoffs in a best-of-three series. The Panthers won the opening match, 3-2.

The score remained tied at 0-0 until Pelham scored first in the bottom of the fourth inning. Sam Finnerty hit a line drive single to left field. After two outs, Hunter Stovall singled to center to drive in Finnerty, earning the RBI and first run of the game.

Prattville answered back in the sixth inning, tying the game at 1-1.

Pelham quickly answered back in the bottom of the sixth when third baseman Jacob Murchison, hit a a single to centerfield. Murchison then stole second with no contest from Prattville, a mistake that haunted the Lions later. Centerfielder Alex Urban made the Prattville pay, as he hit a single to the outfield to put Pelham on top 2-1.

The top of the seventh saw Prattville equalize the score at 2-2.

In the bottom of the inning, Justin Anderson beat out a grounder to take first base. With Murchison at the plate, Anderson stole second. Murchison then hit a hard grounder to Prattville’s shortstop and raced to first. What seemed to be an easy out proved to be nothing of the sort, as Prattville’s first baseman dropped the ball and Anderson rounded third to score. Anderson crossed the plate to give the Panthers the 3-2 win.

The Panthers then faced the Lions in hopes of closing out the series in the second half of the doubleheader. The Panthers took a 2-1 win over the Lions, sweeping Prattville to move on to the second round. Stats were unavailable at press time, as the Panthers await the winner of the Thompson-Spain Park series.

Check back with Shelbycountyreporter.com for more updates.

-Drew Granthum contributed to this report.

Montevallo’s Colby Lucas slides into second in a playoff matchup against Fayette County. Unfortunately for the Bulldogs, the Tigers took... read more