Fun at Fire in the Foot Hills 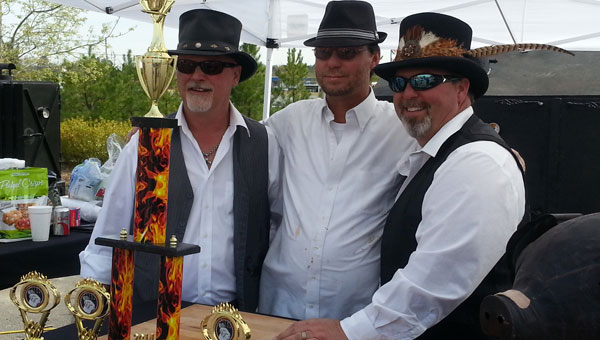 Two Fat Men and a Grill, a team from Childersburg, this year’s Fire in the Foot Hills Grand-Champion of Bar-B-Q: “We do about five or six of these events every year. We search on the internet all across the country and look for events that look like a lot of fun. We love to interact with the community. We had a blast here today.” (Contributed)

“We had about 1,300 visitors to our event this year,” said local chiropractor Dr. Justin Fogo, co-founder of Chelsea’s Fire in the Foot Hills, a local fundraising event. “It was our largest attendance ever.”

Fire in the Foot Hills is a family chili and barbecue cook-off held each April in Chelsea. It benefits The March of Dimes and Chelsea Fire Department’s Fire Dog, Hero, who teaches school kids about fire safety.

From 10 crock pots of chili entered four years ago, and about 30 visitors in the Fire House parking lot, the event has grown each year to include 20 teams of contestants, several venders and now includes a swiftly growing barbecue division filling half the parking lot of Tractor Supply with displays and visitors. This year donations reached just under $5,000.

“This all started because Dr. Fogo and I had an ongoing argument about whose chili was the best. He claimed my chili was no good and I told him his tasted like vegetable soup,” chuckled Scott Weygand, local Farmers Insurance agent and co-founder of the event.

That first year, Fogo’s chili won second place. Scott’s did not place, but donations flowed, crock pots were quickly emptied and a great event was born.

“We had a blast here today,” said Two Fat Boys and a Grill, a team from Childersburg, this year’s grand-champion of the barbecue division. They won the “bling,” a 3-foot trophy and a gift certificate from sponsor Tractor Supply for $250.

Weygand has placed over the years in chili but current founders bragging rights go to Mary Fogo who placed second this year in chili.

CHHS Theatre has fun with ‘Guys and Dolls’

Tate Pollock, center, said “I have to thank vocal teacher Kay Dick who helped me get through singing in front... read more