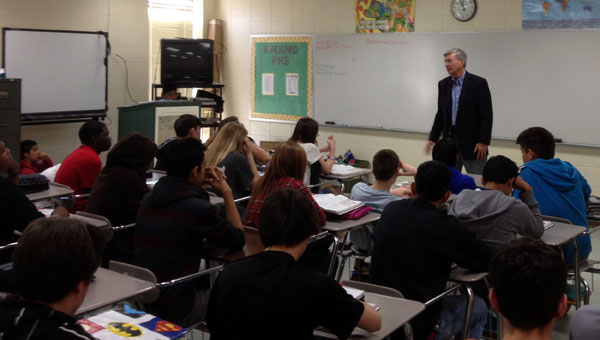 Pelham Board of Education President Rick Rhoades speaks to a class at Pelham High School. (Contributed)

“So you know Coach Rhoades? Did you know that he is really a teacher? He spoke to our history class today. He is an awesome teacher. He was so interesting. I didn’t want to leave when the bell rang,” my daughter, Faith, said. “And we were only two hours away from spring break!”

My daughter’s comments were funny to me. I did know that Pelham City Schools Board of Education President Rick Rhoades is a teacher. In fact, we shared students at Pelham High School for a while when we both taught juniors there. My students arriving from his AP U.S. history classes were always still in discussion about their lessons. Rhoades captivated classrooms and brought history to life. He loved teaching kids and illuminating the past for them.

My favorite part of Pelham City Schools Board meetings is a segment celebrating all of our Pelham schools. At the first meeting after spring break, Rhoades shared his experience speaking to the history classes commenting that they were incredibly bright and invested students.

“I had a great photographer who really helped with my presentation,” Rhoades said, giving credit to his wife, Ames, when I told him that he had rave reviews from the kids.

History teacher Stan Shotts, Pelham alum and a former student of mine, invited Rhoades. Shotts included students from two other teachers’ classes so that many freshmen were able to hear Rhoades.

“Rhoades spent time in Europe during his coaching days and was able to tour some of the remains of the concentration and death camps from the Holocaust and World War II. I asked him to talk to my classes following the conclusion of our World War II unit,” said Shotts.

“The concentration camp pictures in the presentation were the actual camps,” one student said, “and when Coach Rhoades spoke, I could really imagine the people who had been there. That presentation was real.”

With an educator in the lead who understands the value of powerful teaching and abundant extracurricular opportunities, Pelham City Schools is moving toward an exciting future.

Watching while waiting at PHS