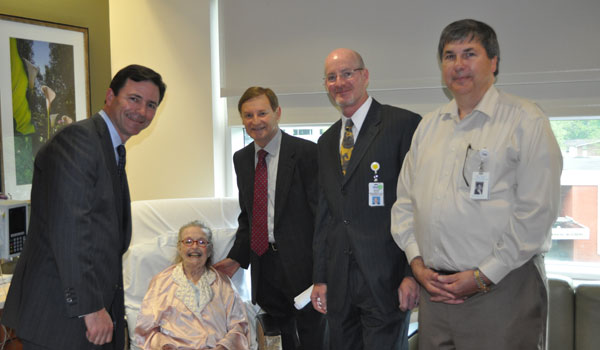 ALABASTER—Rep. Spencer Bachus, who is retiring at the end of this term, discussed medical issues with hospital administrators and Shelby delegation members during a roundtable meeting April 21.

“What a blessing you have been, we’re going to miss you a lot,” Mitchell said.

Alabama State Senator Cam Ward then presented a plaque to Bachus, in honor of his service.

“We appreciate your service,” Ward said. “You’ve been so accessible to all of us.”

Mitchell began the discussion by asking Bachus if it would be more useful for the hospital to “put pressure on CMS (Centers for Medicare and Medicaid Services) or to put pressure on regulation.”

“I would take the judicial approach,” Bachus suggested, saying the hospital could combine with other entities to go to federal courts.

As for change in the system, Bachus remained hopeful that the upcoming elections would make a difference in the Senate.

“I think we’re going to see a change in November, with a new Senate. I think the holdup has been the Senate,” Bachus said. “I do think the Senate is going to change.”

Bachus also warned about the dangers of socialized healthcare, citing the example of two cousins who are doctors in Canada.

“Everything is budget,” Bachus said of the Canadian hospitals, and also notes his cousins have reported a downturn in medical education, which leads to doctors that are “really not qualified.”

“They put you on a waiting list and you die, but ‘everyone gets healthcare,’” Bachus said, inciting a laugh.

Bachus ended the discussion with a promise that his fight in Washington is not over.

“We’re going to go back, sit down and talk to our delegation again,” Bachus said.

Santa is coming to Pelham, in ‘strategically placed’ stops