Many new beginnings in Pelham 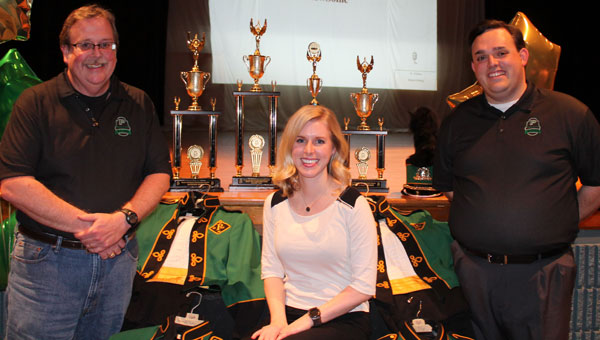 Pelham High School’s new band staff is ready to lead the Tower of Power to continued success in the future. (Contributed)

“I’m interested in building on the great traditions we have here at Pelham,” newly appointed Pelham High School Band Director Justin Ward said at a recent band parent meeting. “We will update some elements, so that we can connect with the community even more.”

Ward revealed a new Pelham Bands logo and a contemporary uniform that the 2014 Drum Majors, Meagan Williams and Jessie Weldon, will lead to direct the band. The drum majors’ new uniforms will complement the current band uniforms while giving these leaders an updated flair that sets them apart.

“We are all excited to have Mr. Chris Moore to lead and teach our percussion section this ear,” Ward said listing Moore’s many credentials. “Katherine Phillips will be our dance team leader, Dana Gsell will be our majorette adviser and our color guard sponsor will be named soon.”

Listing Phillips’ extensive dance training and credentials along with Gsell’s former stint as a University of Alabama Crimsonette, Ward seemed to be discussing every detail he could muster. While everyone was quite impressed with the caliber of the musical team Ward has built, a sense of restlessness seemed to be building among the students.

These students had come to gather good information, but they also were dying to know what the field show performance music would be. At last, Ward was ready to share.

“This year’s field show will be a compilation of great music titled ‘The Pursuit of Happiness,’” Ward said. He went on to describe the show as a musical journey from darkness to light. Ward concluded with a movie to showcase the music for the students and to share some great photos of the PHS Tower of Power Band in performance. Excited students and parents remained after the meeting to plan for and discuss the future.

Ultimately, Ward’s theme reflects the current journey of the entire city right now. In so many arenas, Pelham is committing to not only building on tradition, but also investing in the many new beginnings taking root like wild flowers as summer approaches.