SELC statements have ‘no basis whatsoever in fact,’ according to White Rock Quarry officials 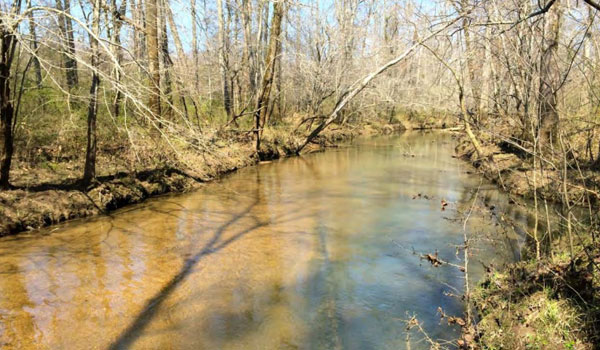 A photograph of creeks running around the site, submitted with the comments by the Southern Environmental Law Center (contributed)

VINCENT—The Southern Environmental Law Center submitted comments on behalf of the Coosa Riverkeeper urging the Alabama Department of Environmental Management to deny a permit for the construction of White Rock Quarry, citing concerns about the damage of sediment discharge and flooding from sediment buildup would have on Lay Lake and downstream private property.

However, White Rock Quarry spokesperson Steve Bradley said the allegations are “nothing more than a red herring” as the calculations cited by the organization are numbers that would only occur “during a major rain events when the quarry is at full depth,” which will not occur for another 15 years, Rob Fowler, an environmental attorney with Balch and Bingham, LLP said.

“The amount of sediment (the SELC cites) is based on a once a year rain event. These are very disingenuous numbers,” Bradley said.

However, both Frank Chitwood and Gil Rogers maintain the amount of sediment projected in their comments and news release, an approximated 600 hundreds of pounds of sediment pollution per day, is an accurate assumption based on the permits.

“The numbers we provided were the same numbers they provided in their permit,” Frank Chitwood, a Riverkeeper with the Coosa Riverkeeper, Inc., said.

“The permit is pretty clear that these discharges from the quarry are not really limited, they’re only limited by concentration,” said Gil Rogers of the Southern Environmental Law Center.

“A tremendous amount (of sediment) runs out now,” Bradley said, and cited the possibility of a “net decrease” in sediment pollution due to the water treatment ponds White Rock Quarry will install.

The SELC and Coosa Riverkeeper, Inc. deny the possibility of a net decrease in sediment pollution due to the quarry.

“Frankly, this claim is laughable,” Chitwood said, and also called the projection an “insult to family farmers that have tilled that land for generations.”

Members of the cast for Vincent Middle High’s production of Grease pose in front of a prop (contributed) By GINNY... read more