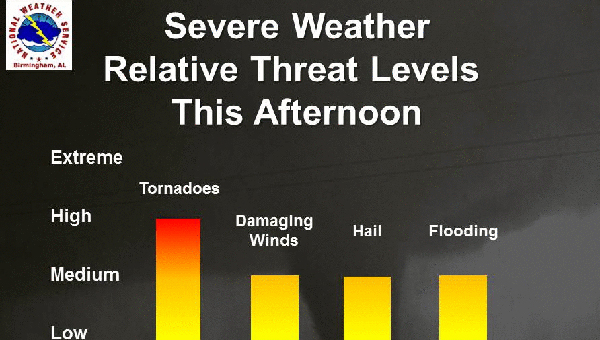 Tornadoes and flooding are possible again today and tonight, according to the National Weather Service. (Contributed)

Shelby County missed the worst of the storms on April 28, but another round of severe weather is on track to impact central Alabama this afternoon and tonight.

According to the National Weather Service office in Calera, severe weather likely will arrive in central Alabama at about 2 p.m. or 3 p.m., and could last until about midnight.

The storms could bring tornadoes, damaging winds, large hail and flash flooding, according to a National Weather Service hazardous weather outlook issued at about 6:15 a.m. on April 29.

Shelby County also is under a flash flood watch through Wednesday morning, as 1-3 inches of rain is possible “on top of what has already fallen.”

“The accumulated rainfall expected with this system will be enough to aggravate some rivers and streams that are already running above normal,” read a flash flood watch advisory issued at about 3:24 a.m. on April 29. “Roadways in low-lying areas will likely flood, especially roads that are close to creeks and streams. Ponding of water will be likely in urban areas where poor drainage exists.”

FROM STAFF REPORTS The Alabaster City School System is considering an early dismissal on Tuesday, April 29 due to the... read more