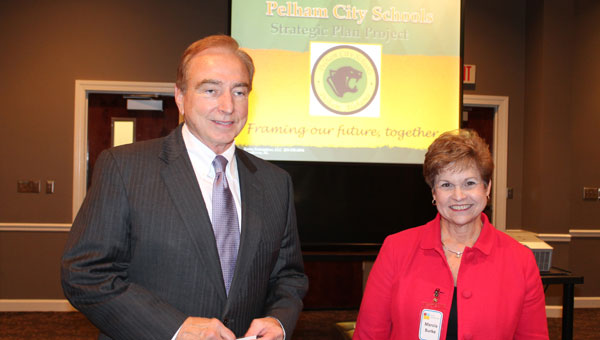 “Your board of education wants you to be involved in this planning process,” Dr. Marcia Burke said as she opened the presentation launching Pelham’s Strategic Planning Community Forum.

Numerous chairs being brought in to seat those present revealed that the community had taken the invitation seriously. Burke’s presentation covered the basics of the five year plan that Burke Enterprises is helping the new school system to create.

The idea of everyone having a voice in the formation of our city’s new school system is exciting, and that excitement became palpable when our large group forum broke up into small groups so that more individuals could speak up and have their opinions, experiences and observations heard and recorded.

Landing in a small group with several of my children’s former teachers including Sylvia Traynham, Leslie Cranford and Jean Coker, I knew the red group was in for a lively discussion. With additional teacher, parent and student input led by a lively facilitator, our group’s remarks quickly filled up wall charts with a shared vision for Pelham City Schools.

All of the small groups covered the same topics ranging from what is right in our schools currently to frank discussions about areas where we must recover, redirect and improve quickly.

“I want classes and clubs that I am passionate about,” Pelham High School freshman Courtney Cole said, “and I want to move around when I’m learning.”

Each group was able to list what an ideal school system would look like. Happy students, inspiring and committed teachers, challenging curriculum, cutting edge technology and safe, clean schools comprised only the initial items on our lengthy list.

Participating as those in our group added to the ideas of others, the wisdom and power of collaborative ideas became clear. Continuing toward their goal of creating a uniquely Pelham City Schools’ System reflecting the desires of the city, the Pelham City Schools System has launched surveys on its websites that will be available through May 22.

All stakeholders are encouraged to take the surveys and share their ideas for creating a uniquely Pelham City School System.