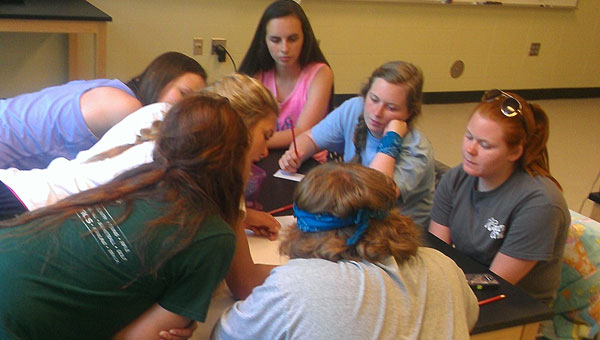 The Thompson High School Peer Helpers lend a hand to their classmates. (Contributed)

In the fall of the 2013-2014 school year, Thompson High School founded a new extracurricular group called the “Peer Helpers.”

The goal of the program is to better the school by allowing students to reach out and help one another, whether that is by welcoming new students, tutoring or conducting peer counseling sessions.

Though the program officially began last fall and has been working to tutor and welcome students, it was not until late April that the group, along with its new inductees, was able to formally begin training for peer counseling.

Members were taught how to help others with tough issues from relationship trouble to grieving the loss of a loved one.

“I feel like I learned a lot,” said Peer Helper Rebecca Brown. “I learned how to talk to people and effective ways to help them cope with things like stress and grief.” Brown is just one of 28 Peer Helpers who attended the training sessions in April. When asked why she chose to join the group, Brown said: “I know I’ve had trouble coping with problems in my life, and anything I can do to help others and prevent that for them in their lives is something I want to do.”

Members and sponsors of the Peer Helpers are optimistic about the future of the program. Beginning with the 2014-2015 school year, Peer Helpers will be available for counseling with other students and will continue to assist the school and community in other ways as well.

Not only is this new program designed to help students with school work and more personal issues, it is also the hope of the Peer Helpers to break cliques and inspire people to simply reach out and make a difference.

Emily Wilson is on the staff of Thompson High School’s TribeUne student newspaper.