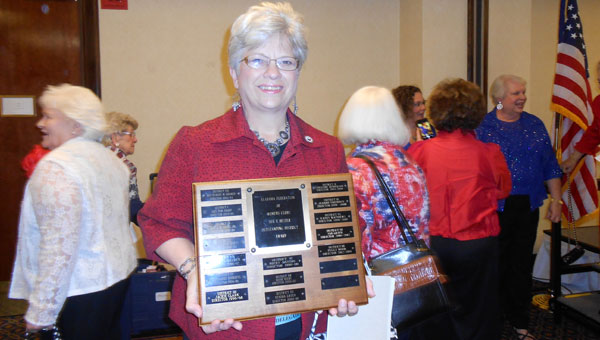 Alabama Federation of Women’s Clubs President Roberta Atchison awarded Peggy Wood the Outstanding District Director Award at the 2014 state convention in Huntsville. Wood, member of the Novella Club of Columbiana, was Third District director for Shelby and Jefferson counties in 2012-2014.

Her Third District project was breast cancer awareness in conjunction with Atchison’s AFWC president project. Over Wood’s two year term, $4,016 was raised for cancer research by selling “chances” for two baskets for which she got donations.

“My father died of lung cancer in 1995,” said Wood. “Ever since then I have supported anything to raise funds or bring awareness to cancer. I started the Novella’s Clubs Survivor Dinner that I have chaired for the last 10 years for cancer survivors and their families. I have also been involved in Relay for Life.”

Wood also championed GFWC projects, Operation Smile and Soles for Souls. She organized the district to raise funds for cleft palate operations and to make “No No” bands for the children. She helped collect shoes for needy adults and children. Also, she organized district silent auctions to raise funds for two $500 scholarships to be given to Shelby and Jefferson counties students.

Wood, daughter of Alcine and the late Edwin Pitts, grew up on Pitts Drive in Columbiana named for her family. She graduated from Shelby County High School in 1973 and is married to Steve Wood. They have two sons and four grandchildren. She is a charter member of the Shelby County Arts Council Partners for the Arts where she is hostess and organizes refreshments for all SCAC events. She takes painting and pottery SCAC classes. She is a member of the Friends of the Library, David Lindsay Chapter of Daughters of the American Revolution and the Shelby County Historical Society.