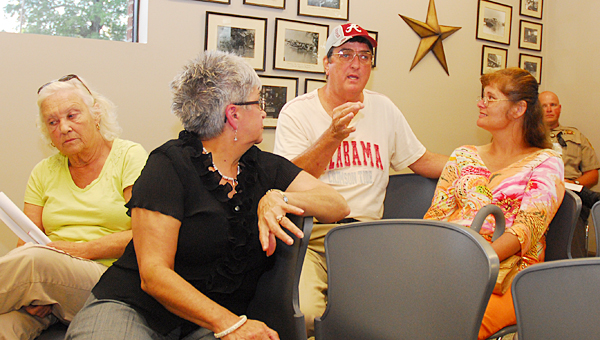 Wilsonville residents voice their opinions on the city’s dog ordinance during a May 6 public forum on the matter. (Reporter Photo/Neal Wagner)

Wilsonville will hire a part-time dog catcher to help enforce the town’s new dog ordinance, which will go into effect on May 19, Town Council members decided during a May 6 meeting.

During the meeting, the council voted 5-2 to authorize Mayor Lee McCarty to contract with a private individual to help enforce the dog ordinance.

McCarty said the individual will work about “eight to 20 hours a month” and will be paid “along the lines of $20 an hour.”

The council also voted 5-2 to put a May 19 effective date on the dog ordinance.

The town originally passed the dog ordinance during a March 25 meeting, but McCarty called it a “symbolic ordinance” without an effective date or means of enforcement.

Under the ordinance, it is unlawful for a person to “possess, keep or harbor in the town” any dog that has not been vaccinated by a veterinarian duly licensed, as evidenced by a tag.

It is also unlawful for the owner or person in charge of the dog to allow the dog to run at large, and any dog found running at large may be impounded. To resume possession of the dog, owners must pay all impoundment and boarding fees and all costs of vaccinations and identification.

According to Shelby County Humane Society Executive Director Sara Shirley, the society will hold stray animals for seven days before making a decision on the animals.

Shirley said after the seven-day period, “pets that are either unsafe or deserve a humane euthanasia to end their suffering” are euthanized. Other dogs will be eligible for the Humane Society’s adoption program.

“We want to handle what the problem is and not create new problems,” Morris said. “We don’t want to go to every house and round up every dog in the city.”

McCarty said Shelby County leaders have declined to address the city’s dog problem, leaving Wilsonville “on (its) own to do something about it.”

Blackerby said he opposed the two motions during the meeting because he wanted to invite county officials to a public meeting to discuss the issue before the City Council took action on the matter.

The Town Council’s vote came after a more than hour-long public forum on the dog ordinance. During the forum, the majority of the about 25 people in attendance said they supported the ordinance, and said stray and loose dogs are a growing problem in the town.

George Adair said he has filed civil lawsuits against his neighbors – who he claimed have about 15 dogs – and encouraged the town to limit the number of dogs one person can own.

Wilsonville resident Larry Lowe praised the council for acting on the issue.

“I want to commend you for finally taking action,” Lowe said. “It’s way, way, way past time to do something about this.”

Other Wilsonville residents said they were afraid the dog ordinance will bring government interference into their lives.

“I’m just really concerned that this is opening the floodgates to be used an abused,” Roosevelt added.

By KATIE MCDOWELL/General Manager COLUMBIANA – The Shelby County Board of Education approved an approximately $750,000 bid to modify entrances... read more