Soccer makes its mark in Montevallo 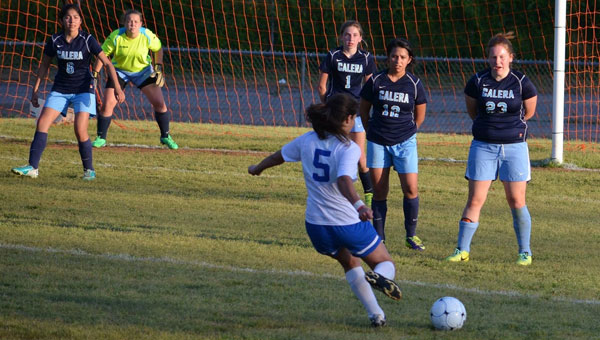 Senior Montevallo High School striker Lupe Serrano kicks for a goal against Calera in the first round of the sub-state playoffs. (Contributed)

The most recent teams added to Montevallo High School’s athletic department are the boys’ and girls’ soccer teams. This year, only their second year in competition, proved to be a year of improvements, challenging matches and remarkable successes.

Although the boys’ team finished with a 6-11 record, including an area record of 4-2, they finished the season as the area runners-up, and competed in the first round of playoffs.

“The boys played a tough schedule,” Coach Christopher Galloway said. “They played four teams ranked in the top 10 in the Alabama 1A-4A classification. The thing I was most proud of was how the team developed over the season and how well they persevered through every challenge in every game.”

The girls’ team completed the season with a 4-5-2 record. They were undefeated in the area, garnering their first area championship. They won their open round match in the sub-state playoffs by defeating Calera 4-1, but lost their second round match against Holy Spirit. The girls’ schedule also included several teams that ranked in the top ten in the Alabama 1A-4A classification.

“My teammates are my favorite part of playing soccer,” senior defender Emily Colley said. “We worked well together and were always encouraging and building each other up.”

Each team’s ability to compete effectively begins with practices, which include much running since conditioning is vital in soccer, discussion and development of formations and work on skill improvement. Galloway also has the teams simulate game situations via team scrimmages.

“I try to establish realistic expectations for my players by having team discussions about what to expect from the opposing team and determine what our preparation will be to address any weakness we may have versus other teams,” Galloway said.

From this year’s successes and definite establishment of the soccer teams, it appears that the world-wide enthusiasm for the sport is making its mark in Montevallo.

“Soccer is an appealing sport because of its intense physicality fused with the grace of competition,” Galloway said. “Hard tackles on one end of the field contrasted with the beauty of a well-placed shot on the other end.”