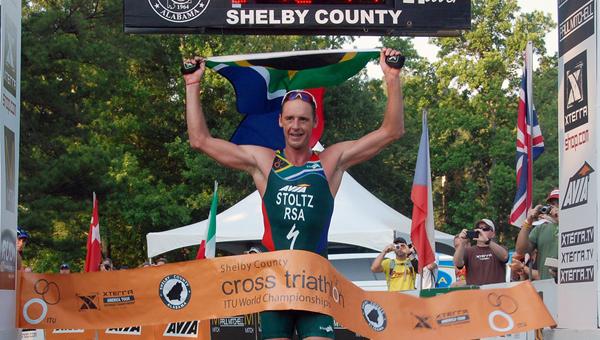 The XTERRA Southeast Championship returns to Oak Mountain State Park in Shelby County for the ninth straight year this weekend; May 17-18. (FILE)

Off-road triathlon’s biggest event of the year in Alabama — the XTERRA Southeast Championship – returns to Oak Mountain State Park in Shelby County for the ninth straight year this weekend; May 17-18.

The main event combines a one-mile swim in Double Oak Lake with a grueling 20-mile mountain bike on the highly acclaimed Oak Mountain “red trail” and a twisty, turny, up-and-down 10k off-road run.  This year there are professional and amateur competitors from 30 states and eight countries competing in the event.

“This venue is our model for big XTERRA races,” XTERRA Managing Director Dave Nicholas wrote in a release.  “It’s the perfect spot for a family weekend and with all our competitors camping and hiking and enjoying the atmosphere together – it’s a one-of-a-kind experience.”

Nicholas’ isn’t the only one with high praise for the course at Oak Mountain State Park.  “Runner’s World Magazine” called the trails one of America’s “Crown Jewels – 25 best trails in the nation,” and the International Mountain Bicycling Association granted them the prestigious EPIC designation – given only to those rare trails “guaranteed to blow your mind.”

The course lures professional athletes from around the world and amateurs from across the nation to Pelham and the accompanying two-day XTERRA Sports Festival provides local athletes and outdoor enthusiasts an opportunity to join in the fun.

The XTERRA Southeast Championship triathlon is the second of four regionals leading up to the XTERRA USA Championship in Utah, September 20.  Pros battle for their share of a $15,000 prize purse and for points towards the overall series title while amateur athletes compete for age group titles and one of the 46 qualifying spots into the XTERRA World Championship in Maui.

In addition to the XTERRA Championship and half-distance XTERRA Sprint off-road triathlons on Saturday, XTERRA will host a full set of trail runs on Sunday.  Events include 5km and 10km fun runs as well as a half-marathon trail run.  At the expo participants will also find free clinics taught by pro athletes, corporate tents, demos, giveaways, music and food.

Competitors, spectators, friends and family are encouraged to stay in one of the myriad of hotel offerings in Pelham for the weekend and take advantage of Oak Mountain State Park which serves as the ideal setting to run, mountain bike, go fishing, ride horses or go golfing.

The elite race on Saturday is certain to be an exciting one—featuring the best in the U.S. including defending champ Josiah Middaugh against the World-beater Dan Hugo of South Africa who has already claimed five championship races this year.

Chelsea senior Will Bevill set the school record for games started in a varsity career with 118, including a streak... read more