HOOVER — The Hoover City Council May 19 appointed former University of Alabama and NFL running back Bobby Humphrey to the city’s Parks and Recreation Board. 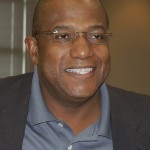 Humphrey, now vice president for business development for Bryant Bank, will succeed Craig Kelley, who was appointed to the Hoover Board of Education in April. Humphrey will serve a six-year term.

Humphrey was a record-setting All-American running back at the University of Alabama in the 1980s before he was selected in the first round by the Denver Broncos in the 1989 NFL Draft. Humphrey was later traded to the Miami Dolphins and was the team’s leading receiver.  After his NFL career, Humphrey was the first head coach of the Birmingham Steeldogs Arena Football 2 team.

Humphrey and his wife, Barbara, live in Hoover and have five children.

Thompson Intermediate School students give a thumbs up on their way home from a May 15 field trip to Chattanooga.... read more