Bell a leader in class and on the field 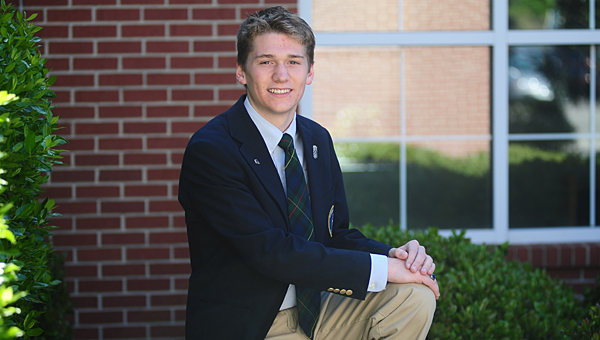 Drury “Dru” Bell serves as a role model and mentor to many at Evangel Classical Christian School. (Reporter Photo/Jon Goering)

By LAUREN HEARTSILL DOWDLE / Special to the Reporter

Drury “Dru” Bell is someone his fellow classmates at Evangel Classical Christian School and community members can look up to. From working with younger students through the performing arts to mentoring those around him, Bell looks to be a positive influence in all of his activities.

“A role model needs to be someone who is doing things others can look to as an example,” Bell said. “It’s about treating others well and be willing to help others.”

Since the third grade, Bell has been performing with the school’s Drama Club and has starred in several plays. In addition to performing, he also works with the middle school drama students.

“I enjoy the process,” he said. “It’s exciting when you’re putting on the persona in front of the audience.”

He serves as a leader in Domus Solis, which is part of the school’s House Mentoring Program that incorporates sixth to 12th grade students. He said he’s really enjoyed getting to know students of all ages and helping them when possible.

Bell is a founding member and captain for the high school’s scholar’s bowl team, and he mentors the middle school team. For four years, he’s also volunteered as a junior interpreter with American Village at Montevallo. There, he works with students from across the area to liven up the stories and history lessons.

Bell is going to attend the University of Kentucky, where he received a full scholarship, in the fall to study classics.

“Not only does Dru excel academically as our school salutatorian and a National Merit Finalist, but he clearly exemplifies the characteristics of a role model in other ways besides academic excellence,” said Julie McGuffey, history department chair, who nominated Bell for the award. “Dru is a student who has consistently and joyfully given of his time to help younger students thrive at our school and in our community.”

Bell has a brother, Charlie, and sister, Bonnie, and is the son of Walter and Melissa Bell.

The following student was selected for the 2014 Shelby County Reporter Nine who Shine section, which recognizes excellence among this... read more