Spears lights up the stage 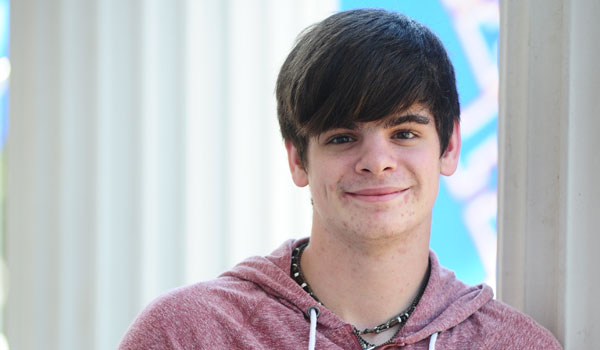 Austin Spears is very involved in theater programs at Montevallo High School and in the community. (Reporter Photo/Jon Goering)

By Lauren Heartsill Dowdle / For the Reporter

Austin Spears, a senior at Montevallo High School, is a star in the classroom and on the stage. Recognized in the Nine who Shine’s fine arts category, Spears is a member of the school’s theater program, along with outside service organizations. He first gained an interest in the performing arts when doing a skit in French class.

“I loved getting into character,” he said. He joined the theater group, the Montevallo Moonlight Players, when he was in the 11th grade and has been in several leading roles. Some of his main parts include Ichabod Crane from “Sleepy Hollow” and Nick Bottom from “Midsummer Night’s Dream.” “My favorite part is show night,” Spears said. “I love the anxiety before opening night – and then seeing the positive reaction or shock from the crowd.”

But it wasn’t long before he transitioned from just a performer into a leadership position with the group. Spears supports the other students by helping with the lights, sound, props, clean up and all of the other aspects that go into a production.

“I just keep it running smoothly,” he says.

Spears also serves as the Montevallo president of the Shelby County Poetry Players and treasurer of Montevallo Peace Maker. When he isn’t at school, theater or volunteering with these groups, he works at Lucky’s Foodland Grocery Store.

After graduating, he plans to attend Chipola College in Marianna, Fla., to study theater. He received full out-of-state tuition to this two-year school. When he finishes at Chipola College, he wants to continue his education to earn a nursing degree.

“Austin is a talented actor who has treated family, friends, teachers and entire audiences at Montevallo High School’s Performing Arts Center to a wonderful array of thespian skills,” said Principal Wesley Hester, who recommend Austin for this award. “Throughout all the wonderful progress, Austin has been there supporting the program, and this year has been his time in the spotlight.”

Spears has two siblings, Connor and Chloe, and is the son of Chris and Michelle Spears.

Holderby has her future in the net

Britne Holderby is planning to continue her soccer career at Penn State University after a stellar tenure at Chelsea High... read more