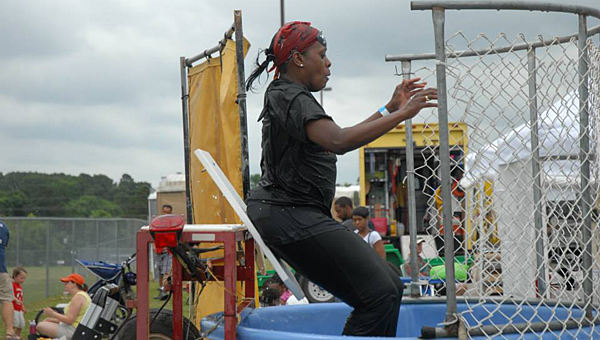 If you’ve ever wanted to dunk city leaders into a tank of water, you will have your chance at the June 7 Alabaster CityFest while raising money for a good cause.

Alabaster First United Methodist Church will hold its second annual dunking booth at the festival from 10 a.m.-4 p.m. between the festival’s main stage and the vendor area.

Mayor Marty Handlon will take the booth first at 10 a.m., followed by a host of other public figures, including City Council members, the city’s fire chief and Thompson High School athletic coaches.

Cost is $1 per ball, or $5 for six balls, said event organizer Trisa Moutardier.

All proceeds will benefit the church’s upcoming Appalachian Service Project trip, during which adults and youth from the church will travel to rural Kentucky to help repair dilapidated houses for those who otherwise would not be able to afford the repairs.

“We may re-roof an entire house or build a wheelchair ramp. These aren’t just little fixes,” Moutardier said on June 6, noting the church will take 33 youth and 19 adults on the trip this year.

CityFest will begin at 9 a.m. at Municipal Park in Alabaster, which is between Thompson High School and Thompson Middle School.

Briarwood student ‘swinging for the fences’ to win skills competition

Holden Patterson, left, is headed to Turner Field in Atlanta to participate in the sectional round of Major League Baseball’s... read more