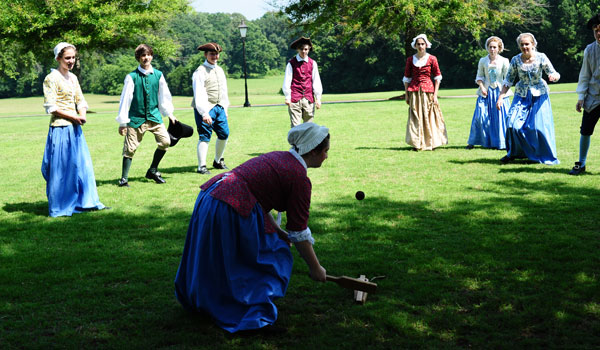 MONTEVALLO—While many teenagers are lounging by the pool, 29 students from grades sixth through twelve have opted instead to spend their summer dressed in Colonial garb, creating a unique experience for visitors at the American Village.

Noel Stewart, director of the Junior Interpreters program, said the program size has increased since its inception, and many of the students come back year after year.

Josh Marvin, a tenth grade student at Evangel Christian High School, said he first decided to interview for the program due to an interest in acting, but soon discovered a passion for history.

Marvin plays Philip Pelham, a composite character created from “what could have been at the time,” Stewart explained.

“It’s one of the best places to brush up on improv,” Marvin said. “It’s become part of what daily life is for me during the summer.”

Molly Mitchell, also a tenth grade student at Evangel Christian High School, is currently in her second year with the program.

“I was always interested in acting, but I never got a chance to do it as much as I wanted to,” Mitchell said, noting that interacting with the public in character was one of the most interesting and challenging parts of the process.

“They have to interact with the public informally. The public will ask you anything, and you have to learn how to not break (character),” Stewart said.

The experience of acting and the exposure to history in “everything there is here” is invaluable, Mitchell said.

“It’s literally like taking on a completely different point of view,” Marvin explained.

Though the Junior Interpreters work hard throughout the day, interacting with visitors, leading Colonial games and practicing vignettes, deep friendships are formed throughout the summer.

Amy Bell, now 20, began in the Junior Interpreters program as an eight grader when she met Andrew Bell, a ninth grader at the time, who acted as her love interest both in the play and later in reality.

“Our characters fell in love and married in the play,” Bell laughed, and almost seven years later the pair was actually married.

This summer, Bell returned to the American Village as a full-time staff member.

By NEAL WAGNER / Managing Editor A 40-year-old Bessemer man has been released from the Shelby County Jail on bonds... read more