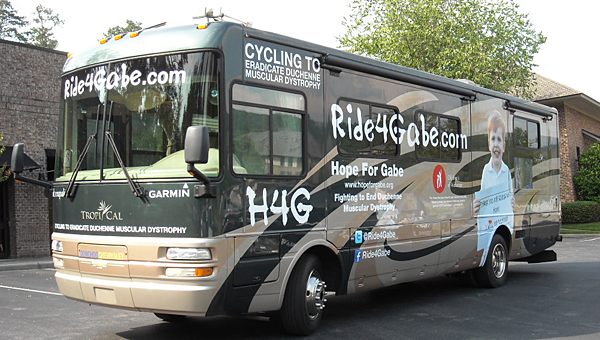 CHELSEA – And they’re off! The Ride4Gabe team departed Birmingham for the west coast June 23, eager to begin the 3,300-mile bicycle ride against Duchenne June 28.

Duchenne is a rare form of muscular dystrophy that about one in every 3,500 boys suffers from. The fatal disease weakens muscles over time, seizing its victims’ ability to walk at about age 12, and claiming their lives in their late teens or early 20s.

9-year-old Gabe Griffin, along with 15,000 other boys in America, suffers from the disease. But Griffin and his family have hope.

Through his parents’ organization, Hope for Gabe, Griffin and others who have been inspired by him, strive to raise awareness for Duchenne to ultimately defeat the disease and save the lives of young boys around the world.

“Through awareness,” said Gabe’s father, Scott Griffin. “I think great things can happen. And I believe through this ride that great things are going to happen.”

Beginning in Astoria, Ore., June 28, the bicycle Ride4Gabe will begin its 3,300-mile trek across the nation to Mobile Alabama.

Cyclists Michael Staley of Washington, D.C., and Wes Bates of Aurora, Colo., will ceremonially dip their tires into the Pacific Ocean before officially setting off. The two will average 75 miles per day as they spread awareness for Duchenne city to city.

In a motorhome provided by Gene Smith III and an SUV donated by Donohoo Auto, the team will pass through Oregon, Idaho, Wyoming, Nebraska, South Dakota, Iowa, Illinois, Indiana, Kentucky, Tennessee and Alabama.

Many cyclists throughout these states will join the Ride4Gabe. A documentary by Luke Chandler will also be put together for the ride.

Much of the Ride4Gabe team consists of volunteers, such as Cara Martof and Chandler, who had never met the Griffins, but were touched by their son’s story. Like the Griffin family, they have hope.

By MOLLY DAVIDSON / Staff Writer A Pelham man is being held in the Douglas, Ga., County Jail after allegedly... read more