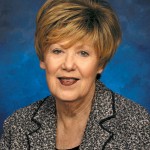 “Throughout her 50-year career, Judy Merritt has been an incredible leader who has touched countless lives,” said Jefferson State Dean of Campus Development and Campus/Legal Services Keith Brown. “She has devoted her life to making a difference in our community and improving the lives of others.”

Judy was appointed president of Jefferson State Community College in 1979 by Governor Fob James. This appointment marked the first time a woman had been named president of a community college in Alabama. With the exception of four years at Florida International University in Miami, she has worked at Jefferson State since its beginning in 1965.

She later became the only female on the SouthTrust Bank board of directors. In 1993, she broke new ground again by becoming the first woman to chair the Birmingham Chamber of Commerce.

“Judy has always believed education is an individual’s pathway to achieving one’s goals and dreams,” said Brown. “She has worked tirelessly to make education more accessible and ensure the pathway to education is clear for all.”

Under her leadership, Jefferson State, which operates a campus on Valleydale Road in Hoover, has grown both geographically and in the number of students served. When Merritt became president at Jefferson State, the college consisted of one campus located in the eastern area of Jefferson County. Through her vision and ability to form partnerships, Jefferson State now has campuses in four counties, serves approximately 15,000 students per year, and is a leader in education in Alabama and beyond.

William Cobb reads the prologue from his newest novel, “A Time to Reap” during a June 25 book signing at... read more